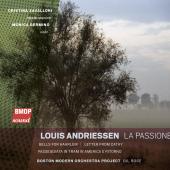 It was another strong year for the homegrown BMOP label, and this disc devoted to the major Dutch post-minimalist composer Louis Andriessen telegraphs the quality and integrity of the series as a whole.

The classical CD world may be down, but it’s not out. To a great extent, recording companies are recycling older material, yet there is a lot of good, new stuff out. Here are a few that captured my attention.

Andriessen is a Dutch minimalist whose many compositions include stage and dance works. His style borrows from Stravinsky, jazz, and American minimalism and especially Terry Riley. His music is anti-German and anti-romantic.

This new recording from Gil Rose and the Boston Modern Orchestra Project of music by Louis Andriessen carries a catalogue of disappointing turns and insipid organizational processes of otherwise promising musical events. The players themselves certainly deserve no rebuke. It is a sound, engaging, and artful execution that because of the clarity and precision of an accomplished performance, cannot help exposing some of the shortcomings in the writing itself.