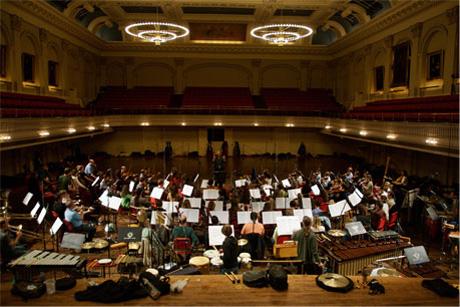 Committed to the preservation of the music of our time, Artist Director Gil Rose has directed BMOP performances on more than seventy-five commercial recordings which are available from Albany, Arsis, Cantaloupe, Centaur, Chandos, ECM, Innova, Naxos, New World, Oxingale, and BMOP’s signature record label, BMOP/sound. In 2008, after nearly twelve seasons of recording, BMOP/sound was launched, not only to provide a platform for BMOP’s extensive archive of music, but also to provide universal access to both classics of the 20th century and the music of today’s most innovative composers. Widely regarded as a label for audiophiles, BMOP/sound has garnered praise from the national and international press; it is the recipient of five Grammy Award nominations and its releases have appeared on the year-end “Best of” lists of The New York Times, The Boston Globe, National Public Radio, Time Out New York, American Record Guide, and Downbeat Magazine. Today, it is considered the nation’s foremost label launched by an orchestra and devoted exclusively to new music recordings.