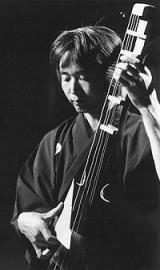 Born and raised in Tokyo Yukio Tanaka began his biwa studies at the age of 22 under the legendary Satsuma Biwa master, Tsuruta Kinshi. In 1973 he graduated from the NHK Hougaku Music Academy and subsequently passed the NHK audition. In 1979 he won first prize in the Japan Biwa Music Contest and then went on to perform internationally in the US, Europe, and Asia as a soloist as well as with Tsuruta-sensei and other prominent classical Japanese artists such as Katsuya Yokoyama (shakuhachi) and Akao Michiko (yokobue). He has released three beautiful CDs of biwa music: Seijaku no Biwa (Victor), Japanese Traditional Music (King), Moonbeam (Victor), and his latest Chinkon Gakka - Deep Red Pathos (Ebisu). He is presently an instructor at the Tokyo University of Music and President of the Japan Biwa Association.