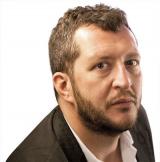 Thomas Adès's meteoric rise to international musical prominence in a period of under ten years, has been an astonishing phenomenon. He was twenty-two in 1993 when he gave his first public piano recital in London (for the Park Lane Group series), an occasion which not only mesmerized a packed Purcell Room, but set in motion a chain of events that has catapulted him to a position at the heart of the British musical scene, and of early international recognition. Although critics have differed in comparing him to Beethoven, Mozart, Purcell or Britten, there is an unusual consensus among them of his originality, musicality, and importance.

Adès is currently Artistic Director of the Aldeburgh Festival, Music Director of the Birmingham Contemporary Music Group, Britten professor at the Royal Academy of Music, and in receipt of more invitations to compose, conduct and play the piano around the world than one individual could possibly handle.

Born in London in 1971, Adès's most obvious musical talent was initially as a pianist, and his winning Second Prize (Piano Class) in the 1989 BBC Young Musician of the Year seemed to indicate a performing career. He studied piano with Paul Berkowitz and composition with Robert Saxton at the Guildhall School of Music, and then went on to read music at King's College, Cambridge from where he graduated in 1992 with a double-starred first. But the BBC prize conversely triggered a move towards composition and in 1990 his first opus, Five Eliot Landscapes appeared. Also composed during Cambridge years was the Chamber Symphony - which was to become his first work to receive a professional performance (BBC Philharmonic under Mathias Bamert in 1993). That same year, just down from Cambridge, he became Composer in Association to the Halle Orchestra (1993-5), for whom he wrote The Origin of the Harp (1994) and These Premises Are Alarmed for the Opening of the Bridgewater Hall in 1996 (when the Halle was conducted by Kent Nagano). His most performed work, Living Toys, was commissioned for the London Sinfonietta and its London premiere (under Oliver Knussen) prompted widespread critical interest and acclaim. The work has had nearly 50 performances since, and has been heard in Strasbourg, Venice, Madrid, Hannover, Helsinki, Paris, New York, Boston, Brussels, Los Angeles, Antwerp, Amsterdam, Aspen, Tanglewood, Oslo, Tokyo, Perth and at the Bath and Aldeburgh Festivals.

But it was the chamber opera Powder Her Face that brought real international recognition. It was commissioned by Almeida Opera for the Cheltenham Festival in 1995 to a libretto by Philip Hensher, and has since been performed in Germany, California, the Aspen Festival, New York, Brisbane and Helsinki. An outpouring of press excitement accompanied these performances: "Overflows with brilliant invention" (Independent) "a brilliant opera by a gifted composer" (The Times); "....a new substantial talent who can write real music and make it as accessible as pop" (Wall Street Journal); "Adès can make a single gesture....speak as eloquently as the most complex harmonic progression" (Guardian); "The multifaceted and colourful sounds Adès conjures up from his never meagre-sounding 15-piece chamber orchestra make it easy to see why at 25 he is regarded as England's most promising young composer" (Die Welt); ".... unfolds with a vitality and assurance that proclaim a born master" (Atlantic Monthly); "Adès has the extrovert panache of a great opera composer" (The New Yorker). The reputation of the new opera was further enhanced by the EMI CD (made from a BBC tape from the premiere performances and conducted by the composer), which was released in September 1998. This CD followed two earlier discs of chamber works: Life Story and Living Toys, issued on EMI Debut series in May 1997 and February 1998 respectively. Adès features as pianist and conductor in these recordings, which later won him the Editor's Choice Gramophone Award (1998). His most recent release is a solo piano recital album including works by Stravinsky, Busoni, Janacek, Grieg and Nancarro.

The extraordinary confidence displayed in this first opera was again revealed in his first large-scale orchestral work, Asyla. This was a Feeney Trust commission for Sir Simon Rattle and the CBSO, and was premiered in Symphony Hall, Birmingham in October 1997, and immediately toured to Manchester, Nottingham, Glasgow, Zurich, Linz and Vienna. A measure of its impact was Sir Simon's subsequent decision to re-schedule it to feature in his last concert as Music Director of the CBSO in August 1998. A recording from this occasion was released by EMI Classics in June 1999 in a coupling with Concerto Conciso, Chamber Symphony, These premises are alarmed and ...but all shall be well - the latter items all conducted by the composer. In the summer of 1999 Adès signed an exclusive seven-year contract with EMI Classics. Summer 1999 also saw the completion of a Channel Four/London Weekend Television Profile of the composer which was relayed in December 1999, a few days after a Channel Four/LWT film of the opera Powder Her Face, which was shown on Christmas Day.

As a backdrop to the flow of works (now numbering twenty-six), Adès has been active as pianist and conductor for the BBC, for the Cheltenham and Aldeburgh Festivals, with the Birmingham Contemporary Music Group, the London Sinfonietta and the BBC Symphony Orchestra. Overseas he has performed his own music with (players from) the New York Philharmonic, Ensemble Modern in Frankfurt and Berlin, the Schoenberg Ensemble in Amsterdam, and in Los Angeles, Toronto, Brisbane, Tokyo, and most recently at the March 1999 Helsinki Music Nova ­ where an Adès 'Focus' (amounting to a retrospective) presented seventeen of his works. In 1998 he made his BBC Proms debut as pianist/conductor in Concerto Conciso, and in the 1999 BBC Proms he conducted the BBC Symphony Orchestra in the London premiere of Asyla.

Thomas Adès's music has attracted several awards and prizes: among them the Paris Rostrum for the best piece by a composer under 30 (1994); the 1997 Royal Philharmonic Society prize for Asyla; the Elise L Stoeger Prize for Arcadiana (New York, 1998); the Salzburg Easter Festival Prize (1999); the Munich Ernst von Siemens Prize for Young Composers (1999); the Asyla EMI CD won a coveted Mercury Music Prize and was the only classical album to be shortlisted for the Mercury Music Prize Record of the Year; and the 2000 Grawemeyer Prize (the largest international prize for composition). Thomas Adès is the youngest composer ever to have won the prestigious Grawemeyer and only the third British winner in its 15-year history.

Adès completed a commission (America, a Prophecy) for the New York Philharmonic Orchestra's Millennium Messages in November 1999 and the piece received its UK premiere at the Aldeburgh Festival in June 2000. Forthcoming commissions include an opera for the Royal Opera House, Covent Garden, an opera for Glyndebourne, and other projects to be announced shortly. December 1999 saw the relay of a Profile on the composer, and a television version of Powder Her Face - both London Weekend Television/Channel Four productions. Adès is currently Artistic Director of the Aldeburgh Festival, Music Director of the Birmingham Contemporary Music Group, Britten Professor at the Royal Academy of Music, and in receipt of a multitude of invitations to compose, conduct and play the piano. As The New Yorker Magazine recently expressed it "he has outgrown his status as the wunderkind of a vibrant British scene and become one of the most imposing figures in contemporary classical music."