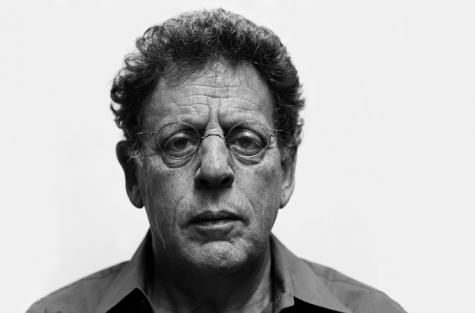 Born in Baltimore, Maryland on January 31, 1937, Philip Glass discovered music in a line of records his father's radio repair shop carried in addition to servicing radios. To figure out why recordings of great chamber works sold poorly, Ben Glass would take them home to play for his three children. Philip rapidly became familiar with Beethoven quartets, Schubert sonatas, Shostakovitch symphonies and other music then considered "offbeat." It was not until he was in his late teens that Glass encountered more "standard" classics.

At six, Glass began music lessons and at eight, took up the flute. But by the time he was 15, he became frustrated with the flute's limited repertoire as well as with musical life in post-war Baltimore. During his second year in high school, he applied for admission to the University of Chicago, passed and, with his parent's encouragement, moved to Chicago where he supported himself with part-time jobs waiting tables and loading airplanes at airports. He majored in mathematics and philosophy, and during off-hours practiced piano and concentrated on such composers as Ives and Webern.

At 19, Glass graduated from the University of Chicago with majors in mathematics and philosophy. Determined to become a composer, he moved to New York and attended the Juilliard School. By then he had abandoned the 12-tone techniques he had been using in Chicago and began gravitating toward American composers like Aaron Copeland and William Schuman.

By 23, Glass had studied with Vincent Persichetti, Darius Milhaud and William Bergsma. Rejecting serialism, Glass preferred such maverick composers as Harry Partch, Charles Ives, Moondog, Henry Cowell and Virgil Thomson - but still had not found his own voice. He then moved to Paris and spent two years of intensive study under Nadia Boulanger.

In Paris, he was hired by a filmmaker to transcribe the Indian music of Ravi Shankar into notation readable to western musicians. In the process, he discovered the techniques of Indian music. After researching music in North Africa, India and the Himalayas, he returned to New York, renouncing his previous music, and applying eastern techniques to his own work.

By 1974, Glass had composed a large collection of new music for both the Mabou Mines Theater Company, that Glass co-founded, and for his own performing group, the Philip Glass Ensemble. This period culminated in Music in Twelve Parts, a three-hour summation of Glass' new music. In 1976 Glass reached an apogee in his collaboration with Robert Wilson, creating the opera Einstein on the Beach, a five-hour epic that is now seen as a landmark in 20th century music-theater. Glass then decided to make Einstein part of a trilogy that resulted in the creation of the operas Satyagraha and Akhnaten. Over the years, Glass and Wilson have worked together on several other projects: the CIVIL warS - Act V (Rome Section) of the multi-composer epic which was written for the 1984 Olympics, White Raven - an opera commissioned by Portugal to celebrate its history of discovery which premiered at EXPO '98 in Lisbon and was performed as part of the 2001 Lincoln Center Festival, and Monsters of Grace - a digital 3-D opera.

Glass has also collaborated with a variety of artists in a range of projects and expanded his repertoire to include music for opera, dance, theater, chamber ensemble, orchestra, and film. His cooperative recording projects Songs from Liquid Days with lyrics by David Byrne, Paul Simon, Laurie Anderson, and Suzanne Vega, as well as a collaboration with Ravi Shankar, Passages. His operas include The Making of the Representative for Planet 8 and Marriages Between Zones Three, Four and Five with librettos written by Doris Lessing and based on her novels; Hydrogen Jukebox, libretto by Allen Ginsberg and based on his poetry; The Voyage, based on the exploration of Christopher Columbus, written by David Henry Hwang; The Fall of the House of Usher, based on the Edgar Allen Poe short story; and the "pocket opera," In the Penal Colony, a musical theater work based on the short story by Franz Kafka. His most recent opera, Galileo Galilei, a collaboration with Mary Zimmerman, premiered in 2002.

Glass film scores include Godfrey Reggio's trilogy Koyaanisqatsi, Powaqqatsi and Naqoyqatsi; Errol Morris' The Thin Blue Line, A Brief History of Time and The Fog of War; Paul Shrader's Mishima; Bernard Rose's Candyman and Bill Condon's Candyman II; and an original score for the re-release of the 1930 Dracula with Bela Lagosi. Critically acclaimed film scores include Martin Scorsese's Kundun - which won Glass the LA Critics Award, as well as the Academy and Golden Globe nominations for Best Original Score - and original music for Peter Weir's The Truman Show - which won a Golden Globe Award for Best Score in 1999. Glass' most recent film work for Stephen Daldry's The Hours has also received a Golden Globe nomination.

While Glass has written for dance such as In the Upper Room, choreographed by Twyla Tharp, and A Descent into the Maelström, his work also involves a set of unclassifiable theater pieces such as The Photographer, The Mysteries and What's so Funny? and 1000 Airplanes on the Roof with a libretto by David Henry Hwang and designs by Jerome Sirlin. Glass has also created a trilogy of musical theater pieces based on the films of Jean Cocteau, Orphée, La Belle et La Bête and Les Enfants Terribles.

For his current touring project, Philip on Film, Glass performs live with his ensemble to a series of new short films as well as classics like Koyaanisqatsi, Powaqqatsi, La Belle et La Bête, and Dracula.