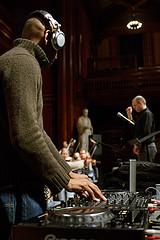 Paul D. Miller aka DJ Spooky is a composer, multimedia artist and writer. His written work has appeared in The Village Voice, The Source, Artforum and The Wire amongst other publications. Mr. Miller's work as a media artist has appeared in a wide variety of contexts such as the Whitney Biennial; The Venice Biennial for Architecture (2000); the Ludwig Museum in Cologne, Germany; Kunsthalle, Vienna; The Andy Warhol Museum in Pittsburgh and many other museums and galleries. His work New York Is Now has been exhibited in the Africa Pavilion of the 52 Venice Biennial 2007, and the Miami/Art Basel fair of 2007. Mr. Miller's first collection of essays, entitled Rhythm Science came out on MIT Press 2004. His book Sound Unbound, an anthology of writings on electronic music and digital media was recently released by MIT Press.

Miller's deep interest in reggae and dub has resulted in a series of compilations, remixes and collections of material from the vaults of the legendary Jamaican label, Trojan Records. Other releases include Optometry (2002), a jazz project featuring some of the best players in the downtown NYC jazz scene, and Dubtometry (2003) featuring Lee 'Scratch' Perry and Mad Professor. Mr. Miller's latest collaborative release, Drums of Death, features Dave Lombardo of Slayer and Chuck D of Public Enemy among others. He also produced material on Yoko Ono's recent album Yes, I'm a Witch.

DJ Spooky's Rebirth of a Nation was commissioned in 2004 by the Lincoln Center Festival; Spoleto Festival USA; Weiner Festwochen; and the Festival d'Automne a Paris. It was the artist's first large-scale multimedia performance piece, and has been performed in venues around the world, from the Sydney Festival to the Herod Atticus Amphitheater, more than fifty times. The DVD version of Rebirth of a Nation was released by Anchor Bay Films/Starz Media in late 2008.

In August 2009, DJ Spooky visited the Republic of Nauru in the Micronesian South Pacific to do research and gather material for a project in development, with a working title of The Nauru Elegies: A Portrait in Sound and Hypsographic Architecture.

DJ Spooky's CD The Secret Song was released on October 6, 2009 on Thirsty Ear Records. With guest appearances by Thurston Moore, The Coup, Mike G. of the Jungle Brothers, Rob Swift of the X-Ecutioners, Mike Ladd, Vijay Iyer, and many others, The Secret Song is a manifesto about our overloaded digital culture.

The three works on this enterprising release showcase a genuinely American composer, Anthony Paul De Ritis, professor and chair of the music department at Northeastern University in Boston, whose music lies rooted in its determination to meld science with humanity. To do so, De Ritis draws on the resources of his acoustic-electronic laboratory and applies them with a healthy enthusiasm for engaging tunes and harmonies, lively beat and a love of Technicolor.

Sometimes when a theme presents itself, the best action is to run with it! This edition of the NewMusicBox Mix consists almost entirely of music for string instruments. Directly below you will find a link to download a folder containing the eight tracks of the mix. In addition, each track is streamed separately on this page, with information about the recordings and purchasing links to encourage further exploration and continued listening.

Anthony Paul De Ritis is the chair of the Department of Music and Multimedia Studies at Northeastern University. I have heard good things about De Ritis’s music and its reliance on an eclectic, crossover combination of sound sources as well his skill at writing captivating music that unfolds in real time. De Ritis had studied with Kyle Gann, with whom I am familiar and also philosophy with Richard Fleming. De Ritis is, clearly, a bit of a visionary, himself and I find all three of these pieces new, refreshing and fascinating to listen to.

Listening to Anthony Paul De Ritis's Devolution is somewhat akin to watching a Tarsem film: The mixture of influences, references and textures is both blindingly apparent and blindingly gorgeous.

WQXR Full review
[Concert Review] Maestro, is that a DJ with your orchestra?

Anyone who caught the Ben Folds performance with the Boston Pops last week and was struck by the thinness of the meeting of musical worlds should have been there on Saturday night at Sanders Theatre to hear the Boston Modern Orchestra Project tee off on three bracingly imaginative works infused with rock ‘n’ roll and other popular styles.

Gil Rose and his Boston Modern Orchestra Project are nothing if not adventurous, playing all sorts of new music and bringing classical music to pubs and bars.

Tonight they take that spirit even further by performing Anthony De Ritis’ Devolution: A Concerto for DJ and Orchestra featuring DJ Spooky the Subliminal Kid; Steven Mackey’s Dreamhouse featuring electric guitars and vocalists; and the world premiere of Evan Ziporyn’s Hard Drive. The program, at Sanders Theatre, is part of the Celebrity Series Boston Marquee performances.

In the basement of the Masonic Hall in Porter Square, conductor Gil Rose is giving members of the Boston Modern Orchestra Project fair warning. “This is going to get pretty loud,” he says.

Gil Rose and the Boston Modern Orchestra Project (BMOP) will perform Devolution, an original piece composed by Northeastern professor Anthony De Ritis and featuring DJ Spooky (Paul D. Miller) on May 19th at 8 p.m. at the Sanders Theater, as part of the Bank of America Celebrity Series.

Presented by the Bank of America Celebrity Series, and its President and Executive Director, Martha H. Jones, the Boston Modern Orchestra Project (BMOP) celebrates the final concert of its 10th anniversary season with a Boston Marquee performance May 19th @ 8:00pm, at Harvard University's Sanders Theatre (45 Quincy Street, Cambridge). As the nation's only orchestra dedicated exclusively to performing, commissioning, and recording new music of the 21st century, BMOP turns its focus to American composers inspired by rock and roll.

The 68th season of Bank of America Celebrity Series opens with ‘‘A Cajun Celebration” Oct. 15, featuring the Preservation Hall Jazz Band in a benefit performance for the New Orleans Musicians Hurricane Relief Fund and the Celebrity Series Arts, Education and Community Program.

De Ritis draws on the resources of his acoustic-electronic laboratory and applies them with a healthy enthusiasm for engaging tunes and harmonies, lively beat and a love of Technicolor.