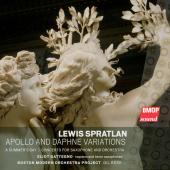 Deeply drawn to the theater and to the theatrical, Lewis Spratlan (born 1940) is best known for his opera Life Is a Dream (it won the 2000 Pulitzer) and has written several other major works for stage production, though his interest in musical drama also extends to his purely instrumental compositions. My favorite of these is his clever, entertaining, sometimes hilarious 1986 sextet When Crows Gather, recorded, with three other very enjoyable (and also extravagantly uninhibited showpieces) on Albany 725 (July/Aug 2005).

Spratlan’s musical version of A Summer’s Day (2008), commissioned and premiered by BMOP, has the instant nostalgia of a strongly evoked, specific time and place. His “Pre-Dawn Nightmare” includes fragments of the theme song to The Sopranos; “At the Computer” evokes the sounds of an already-obsolete desktop machine. And the connective tissue of the piece, the folk-like tune presented at the outset (“Hymn to the Summer Solstice”), is a memory of summer romanticized into an abstraction.

The American composer Lewis Spratlan, born in 1940, gained wide attention in 2000 when a concert version of Act II of his opera “Life Is a Dream,” which was completed in 1978 but had never been staged, won the Pulitzer Prize for Music. This welcome new recording from the impressive Boston Modern Orchestra Project offers three ingeniously written and distinctive Spratlan works. “A Summer’s Day” (2008) uses a simple, dreamy Celtic tune at the start as a jumping-off place for an elusive, complex suite that ruminates on the tensions below the surface of an inviting day.