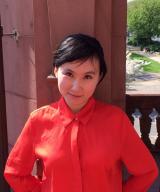 Composer and pianist Wang Lu was born in Xi’an, the ancient capital of China. Being brought up in a musical family with strong Chinese opera and folk music traditions, her works reflect a very natural identification with those influences, through the prism of contemporary instrumental techniques and new sonic possibilities.

Since 2015, Wang Lu is an Assistant Professor of Music at Brown University, where she teaches composition and theory. She is the Spring 2019 Berlin Prize Fellow in composition at the American Academy in Berlin, and was a 2014 Guggenheim Fellow. She won the first prize at Le Nouvel Ensemble Moderne’s Young Composers Forum in 2010 and shared the Tactus International Young Composers Orchestra Forum Award in 2008, resulting in multiple performances with the Orchestre National de Lille. She was selected for a Tremplin commission by IRCAM/Ensemble Intercontemporain in 2010, as well as a commission to write for the Ensemble Modern in 2012 as part of its International Composition Seminar, and has also received two ASCAP Morton Gould awards. Her orchestral work Scenes from the Bosco Sacro was selected for the 2014 New York Philharmonic Biennial New Music Readings. Most recently, she received a Koussevitzky Music Foundation commission for a new piece for Yarn/Wire.

She received her doctoral degree in composition at Columbia University in 2012, after graduating with highest honors from the Beijing Central Conservatory of Music in 2005. Her composition teachers have included Fred Lerdahl, Tristan Murail, George Lewis, and Chou Wen-chung. Her music is published by Project Schott New York (PSNY) and in self-published editions.