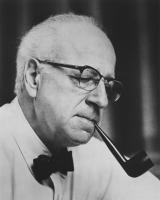 Walter Piston was recognized in his lifetime as the ultimate musical craftsman, producing a body of orchestral and chamber work distinguished by its quintessential neo-classic qualities of clarity and proportion. Also a noted educator, Piston taught at Harvard from 1926 to 1960 and wrote three significant music textbooks: Harmony (1941), Counterpoint (1947), and Orchestration (1955). Among Piston’s many noted students were Elliott Carter, Leonard Bernstein, and Arthur Berger.

Following graduation from Harvard in 1924, Piston traveled to Paris for studies with Nadia Boulanger and Paul Dukas. There he became enamored of French neo-classicism and the later works of Faure and Roussel. A musical climate celebrating a revival of Bach and the discovery of jazz infiltrated his work. Returning to the United States, Piston developed a sophisticated and witty compositional style, capturing with precise accuracy the many cultural and philosophic trappings of his native New England. His Symphonies Nos. 3 and 7 earned him Pulitzers and works like the ballet suite The Incredible Flutist and Three New England Sketches brought popular success and renown for a musical style that struck a perfect balance between form and expression. Piston enjoyed a close working relationship with Serge Koussevitzky and the Boston Symphony Orchestra which commissioned several works from the composer.