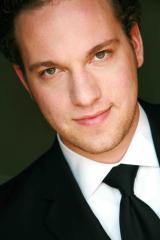 Described by The New York Times as an “oceanic bass,” Tom McNichols continues to garner praise for work ranging from internationally acclaimed premiers with original cast recordings to standard concert repertoire. In the last 10 years, his voice has been heard on five continents in live performance, live and recorded radio broadcasts and eleven studio recordings including the narration of How the Grinch Stole Christmas with the Boston Pops, International premieres of new operatic works, full time touring in the acclaimed men’s vocal ensemble CANTUS as well as a soon to be released feature film adaptation of La bohème called The Bohemians (set and filmed in modern day Williamsburg, NYC) and features on the Gotham/Naxos release of In Parasdisum with the South Dakota Chorale. 2010 began with the Monte Carlo premiere of Death and the Powers for which Musical America praised a “powerful sonorous bass,” followed by his Carnegie Hall Debut with the Opera Orchestra of New York and roles in Madame Butterfly, Donizetti’s Requiem, and the world premiere of Il Caso Mortara, all with the DiCapo Opera Theater in NYC. Revivals of Death and the Powers with the American Repertory Theater and Chicago Opera Theater, recording the original cast album and another cover with OONY followed in 2011. 2012 was the year of Sarastro, a role he sang with Opera Grand Rapids and with Trenton’s Boheme Opera and will reprise with Opera Carolina and Opera Omaha in 2013. In late 2012, Tom premiered the role of God in the new chamber opera The Mark of Cain with Chelsea Opera in NYC, as well as roles in Il Tabarro and Gianni Schicchi with the Baltimore Concert Opera. Additional roles in 2013 include Banquo (Macbeth—Baltimore Concert Opera), Acciano and Pirro (I Lombardi—Opera Orchestra of NY) and the premier of La Reina, a new opera in workshop by the American Lyric Theater. 2014 begins with a revival of Death and the Powers at Dallas Opera and his debut as Ferrando in Il Trovatore with Opera Sacramento.

Appearing as a grand semi-finalist in the Metropolitan Opera National Council Auditions in 2008 led Tom to resign from CANTUS, a position he held for four seasons straight out of graduate school. In addition to over 300 performances in venues including Lincoln Center, The Kennedy Center, Spivey Hall, and the Library of Congress, those years included eight studio recordings and countless live broadcasts via NPR, EBU, CBC, APM, MPR, and other radio distribution networks. Five years after leaving CANTUS, Tom is most excited to have been involved with and featured on the original cast production and recording of All is Calm: The Christmas Truce of 1914. This true story has been told in many mediums from film to television and yet CANTUS’s version, a hybrid of straight theater, concert and Music Theater, continues to run every year at the Pantages Theater in Minneapolis as well as national tours. Last season, the reviews of the production, in competition with Minnesota Opera’s grand scale premier of the same story, proved that CANTUS’s version is here to stay. CANTUS remains America’s premier men’s vocal ensemble.

Tom holds a BA in Theater Performance from The State university of NY-Plattsburgh and MM from The Peabody Institute at The Johns Hopkins University. He resides in NYC where he studies with Michael Paul and is proud to claim the great British baritones Norman Baily and John Shirley Quirk as his mentors during his studies. All of his recorded work is available on iTunes. Tom is represented exclusively by Robert Lombardo and Associates.