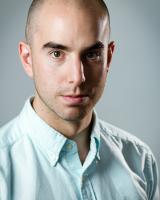 Simon Dyer, British bass, was born and raised in East London and is now based in the United States. An international performer, Dyer has been seen at the Boston Conservatory in the title role of Le Nozze di Figaro, as Nick Shadow in The Rake’s Progress, Mustafa in L’italiana in Algeri, Collatinus in The Rape of Lucretia, and the Immigration Officer in Jonathan Dove’s Flight. Since moving across the Atlantic, Mr. Dyer has also been seen as Superintendent Budd in Albert Herring with Boston Opera Collaborative, and as Luka in The Bear and Mr. Grinder in The Zoo with Odyssey Opera. He was a featured soloist in Berio’s Coro at the Lucerne Festival under the baton of Sir Simon Rattle, and in January 2016 was curator of an immersive performance art event of John Cage’s Song Books at Boston’s Museum of Fine Arts, where he will return for a solo recital in 2017. He makes his solo debut with Boston Lyric Opera at the start of 2017, and will also work with the composer Andy Vores on the video installation performance of his epic Panic, an evening-length song cycle for baritone, piano, and electronic playback based on the novel Pan by Nobel-winning Norwegian author Knut Hamsun.

Often working with living composers, Dyer has premiered works by Gregory Rose and Simone Spagnolo, and has worked with LSO Soundhub, Size Zero Opera at the Tête à Tête Festival, and the innovative theatre group Complicite. Dyer has also sung with the Philip Glass ensemble at Barbican Hall in a performance of Koyaanisqatsi, and in a festival event at Trinity Laban dedicated to the works of John Cage, where he took part in a performance of A Dinner Party for John Cage by Steven Montague as well as Cage’s 5.