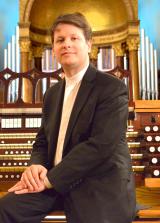 Heralded as “one of the major musicians of our time” by Alex Ross of The New Yorker and as “America’s leading organ performer” by The Economist, the internationally celebrated organist Paul Jacobs combines a probing intellect and extraordinary technical mastery with an unusually large repertoire, both old and new. An eloquent champion of his instrument, Mr. Jacobs is known for his imaginative interpretations and charismatic stage presence. He has performed to great critical acclaim on five continents and in each of the fifty United States and is the only organist ever to have won a Grammy Award—in 2011 for Messiaen’s towering “Livre du Saint-Sacrément.”  No other organist is so frequently re-invited as soloist to perform with prestigious orchestras, thus making him a pioneer in the movement for the revival of symphonic music featuring the organ. Mr. Jacobs regularly appears with the Chicago Symphony, Cincinnati Symphony, Cleveland Orchestra, Edmonton Symphony, Indianapolis Symphony, Kansas City Symphony, Los Angeles Philharmonic, Lucerne Symphony Orchestra, Minnesota Orchestra, Montreal Symphony,  Nashville Symphony, National Symphony Orchestra, Pacific Symphony, Phoenix Symphony, Philadelphia Orchestra, San Francisco Symphony, Toledo Symphony, and Utah Symphony, among others.

Mr. Jacobs has transfixed audiences, colleagues, and critics alike with landmark performances of the complete works for solo organ by J.S. Bach and Messiaen, as well as works by a vast array of other composers. He made musical history at the age of 23 when he played Bach’s complete organ works in an 18-hour marathon performance on the 250th anniversary of the composer’s death. A fierce advocate of new music, Mr. Jacobs has premiered works by Samuel Adler, Mason Bates, Michael Daugherty, Bernd Richard Deutsch, John Harbison, Wayne Oquin, Stephen Paulus, Christopher Theofanidis, and Christopher Rouse, among others. As a teacher he has also been a vocal proponent of the redeeming nature of traditional and contemporary classical music.

​In the 2021-22 season Paul Jacobs makes debuts with the Boston Symphony in Janáček’s Glagolitic Mass conducted by Jakub Hrusa, and with the Warsaw Philharmonic in the Lou Harrison Organ Concerto led by Alexander Shelley, he will perform Horatio Parker's Organ Concerto and Alexandre Guilmant's First Organ Symphony with Wroclaw Philharmonic under Giancarlo Guerrero in Poland, returns to the Chicago Symphony for Handel Organ Concerti, and debuts with the Boston Modern Orchestra Project in an organ spectacular featuring Stephen Paulus' Grand Organ Concerto and Josef Jongen's Symphonie Concertante. In recital he can be heard with the Pacific Symphony, the University of Chicago Presents, Parlance Chamber Concerts, the Eccles Organ Festival, and with the Bethlehem Music Series.

​During the 2020-21 season Mr. Jacobs performed with the Philadelphia Orchestra led by Yannick Nezet-Seguin for their digital streaming series including the Poulenc Organ Concerto, as well as chamber versions of Mahler’s Symphony No. 4 and Das Lied von der Erde; with the Cleveland Orchestra and Franz Welser-Most for the Poulenc Concerto, and the Jackson (TN) Symphony.  He appeared in recitals with the Madison Symphony, Northrup Auditorium at the University of Minnesota, and in Sun City, AZ.

​He has given the world premiere of Christopher Rouse’s Organ Concerto with the Philadelphia Orchestra—co-commissioned by the National Symphony and the Los Angeles Philharmonic—and, with the Toledo Symphony, has performed Michael Daugherty’s Once Upon a Castle, a work he recorded in 2015 with the Nashville Symphony Orchestra and conductor Giancarlo Guerrero which was released by Naxos in September 2016, and awarded three Grammys, including Best Classical Compendium.

"Step aside, Hugh Jackman. If anyone deserves to be called the greatest showman, it’s organ virtuoso Paul Jacobs, who returned to the Philadelphia Orchestra this past weekend for the local premiere of a witty, memorable work written specifically for him."

​"No stranger to Philadelphia audiences, Jacobs performed with the orchestra on the mighty Fred J. Cooper Memorial Organ, and one could not imagine a more colorful, thrilling and artistically nuanced presentation. Jacobs is a showman in the best possible sense, exploring and exploiting all the possibilities of this king of instruments, but always in the service of the composer’s intent."

In the fall of 2019, Mr. Jacobs highlighted the organ on the New York concert scene, performing in a three-recital series for solo organ to critical acclaim. The series, entitled “The Great French Organ Tradition,” gave New Yorkers the rare opportunity to hear this master organist on three important New York instruments: on the Holtkamp organ in the Juilliard School’s Paul Recital Hall; the 1933 Aeolian-Skinner “Opus 891” at the Church of  St. Mary the Virgin; and St. Ignatius Loyola’s 1993 Mander Organ.

​Of his performance of Widor’s Toccata, Jay Nordlinger of The New Criterion wrote on September 19, 2019:

​"What was it like? Like you, perhaps, I have heard this piece 568 times. Never quite like this. It was bracing, inexorable, heart-stopping (and heart-swelling at the same time). It was a divine delirium. Your bones rattled—literally. (I am talking about physical sensations.) Never have I been more aware of the poverty of a recording, any recording. Paul Jacobs played the Toccata with the stringency, the tenderness, and the élan that the piece requires. (I am taking the technique for granted, which one should not.) Afterward, audience members kept asking one another, “What was that? What was that piece?” Widor, I believe, would have been tickled."

Then Mr. Nordlinger, in The New Criterion “New York Roundup” for the month of October 2019, added:

​"What makes Paul Jacobs a great organist? Let me count a few of the ways. He is exceptionally smart.  He has superb judgment. He is no-nonsense, not fussing over music or cutting it up. He has fabulous fingers, and feet. His performances are virtually unblemished. He has a keen sense of rhythm, which is important for any musician, but maybe especially so for an organist. He knows how to deal with colors, dynamics—all of it. Let me stress his stringency, that no-nonsense quality. Never will you hear playing less airy-fairy or namby-pamby—yet he is never insensitive, in the least. Sitting in a pew, I thought, “He is like a Szell of the organ.” If George Szell, the great conductor, had been an organist, he would have played like Paul Jacobs. I cannot render higher praise than that."

George Grella, writing for New York Classical Review (September 18, 2019), had this to say:

"Jacobs played [Messian’s] Messe de la Pentecôte with a seamless sounding sympathy, gliding through the haunting, spooky passages of isolated timbres and bird calls floating above a cloud of harmonies, at other times playing with such terror and technical skill that the music sounded improvised on the spot. One was again impressed with Jacobs’ orchestral choices, which sounded right for the music, including the crystalline descending cadences that sounded like angels gliding down from the heavens."

​Marking an important milestone for the development of organ playing in Asia, Mr. Jacobs participated in the 2017 launch of China’s first International Organ Competition—in Shanghai—when he was appointed to serve as president of the competition’s jury. After another successful guest engagement with the Philadelphia Orchestra at Philadelphia’s Verizon Hall performing both Oquin’s Resilience, for organ and orchestra, and James MacMillan’s A Scotch Bestiary, Mr. Jacobs was invited by Music Director Yannick Nézet-Séguin to tour three major European cities with the Philadelphia Orchestra in May 2018. He played the Oquin work in Brussels, Luxembourg, and in Hamburg’s recently inaugurated Elbphilharmonie.

​"Seated at the console was the organist Paul Jacobs, a virtuoso of dazzling technical acumen, who anchored this recital of devotional music as part of the Lincoln Center White Light Festival. […] Mr. Jacobs showed off  his mastery in a handful of solo selections by Bach, Reger, Charles-Marie Widor and Nadia Boulanger, Lili’s sister. In Reger’s Toccata and Fugue, he built up a wonderfully organic crescendo in which the music expanded in all dimensions — brightness, clarity and volume — until it filled the room with a pulsating, radiant cloud of sound. Mr. Jacobs and Ms. Brewer recorded a CD for Naxos entitled Divine Redeemer, featuring works by Bach, Handel, Franck, Nadia and Lili Boulanger, Puccini, Gounod, and Reger."

Prodigiously talented from his earliest years, at 15 young Jacobs was appointed head organist of a parish of 3,500 in his hometown, Washington, Pennsylvania. He has performed the complete organ works of Olivier Messiaen in marathon performances throughout North America. In addition to his highly esteemed recordings of Messiaen and Daugherty on Naxos, Mr. Jacobs has recorded organ concertos by Lou Harrison and Aaron Copland with the San Francisco Symphony and Music Director Michael Tilson Thomas on the orchestra’s own label, SFS Media.

Mr. Jacobs studied at the Curtis Institute of Music, double-majoring with John Weaver for organ and Lionel Party for harpsichord, and at Yale University with Thomas Murray. He joined the faculty of The Juilliard School in 2003, and was named chairman of the organ department in 2004, one of the youngest faculty appointees in the school’s history. He received Juilliard’s prestigious William Schuman Scholar’s Chair in 2007. He continues as Director of the Oregon Bach Festival Organ Institute, a position he assumed in the summer of 2014. In addition to his concert and teaching appearances, Mr. Jacobs is a frequent performer at festivals across the world, and has appeared on American Public Media’s Performance Today, Pipedreams, and Saint Paul Sunday, as well as NPR’s Morning Edition, ABC-TV’s World News Tonight, and BBC Radio 3. In 2017 he received an honorary doctorate from Washington and Jefferson College. Mr. Jacobs has written several articles for the Wall Street Journal.

Pulling Out All the Stops
Symphony Hall | February 18, 2022
Concert Details