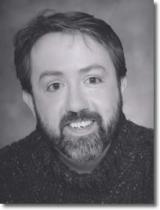 bass
Bass-baritone Paul Guttry enjoys the variety of opera, oratorio, and a specialization in early music. A former member of Chanticleer, Paul has performed throughout the USA and internationally with Sequentia, the Boston Camerata, and New York's Ensemble for Early Music. He has appeared in concert and opera with the Seattle Early Music Guild, St. Paul's Ex Machina, the Plymouth Music Series in Minneapolis, the Austin-based choir Conspirare, and the Santa Fe Pro Musica. In Boston he has appeared as soloist with Emmanuel Music, the Handel & Haydn Society, the Boston Early Music Festival, the Tanglewood Music Center, Cantata Singers, Boston Cecilia, Prism Opera, Intermezzo, Boston Revels, and Collage. In November, with Sequentia, he will be part of the "opening act" for the Boston Symphony's performance of Carl Orff's well-known work for orchestra and chorus, singing excerpts from the medieval Carmina Burana manuscript. Paul can be heard on recordings of medieval music by Sequentia, Kurt Weill's Johnny Johnson and French airs de cour with the Boston Camerata, and on recordings of Bach by Emmanuel Music.