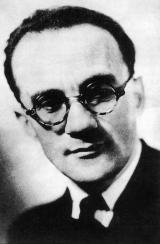 Nikos Skalkottas (1904-1949) is a leading figure in Greek music (with Manolis Kalomiris [1883-1962], the founder of a 'modernist national school'). Skalkottas and Dimitri Mitropoulos--later to establish himself as a world-renowned conductor--were the first Greek composers to adopt atonality and the twelve-tone method in the 1920s. Skalkottas also explored 20th-century tonal idioms.

Nikos Skalkottas was born on March 8, 1904 in Halkis (island of Eubea, Greece). His great-grandfather, Alexander Skalkottas, from Pyrgos (island of Tinos) was a renowned folk singer, violinist and composer; his father, Alexander Skalkottas, was a flutist. A child prodigy himself as a violinist, Nikos pursued his studies first in his hometown with his uncle Costas, later at the Athens Conservatory, graduating with the First Prize Gold Medal in 1920. In 1921, on a series of scholarships, he left for Berlin where he stayed until 1933, first taking violin master courses with Willy Hess at the Berlin Hochschule, then in the winter of 1923-24 turning definitely to composition, for which his main teachers were Phillipp Jarnach (1925-27), Paul Juon, Kurt Weill and Arnold Schoenberg (1927-31).

He composed prodigiously, in a personal atonal idiom, using the twelve-tone system rather seldom and somewhat reluctantly at that time. When the mounting wave of Nazism made life for exponents of new music difficult, Skalkottas returned to Athens in May 1933, the same month that Schoenberg left Germany. In Greece, unfortunately, Skalkottas met with a great deal of incomprehension and enmity, and was obliged to accept a position as one of the last violins in the State Orchestra of Athens. He isolated himself, refusing to talk about music to all but a few people who, he thought, appreciated contemporary music, all the while composing feverishly until his death on September 19, 1949 in Athens as a result of a neglected constricted hernia. Practically his entire output remained unknown, unpublished and unperformed during his life.

In 1935 he turned to a new, quite complex but highly concise version of the twelve-tone system of his own invention, which he used extensively until his death, parallel with, beginning around 1938, a non-serial method that sounds only slightly different from the other technique. His main innovations consist of creating an entirely new sound world by developing formal structures operating at multiple concurrent levels, and by the intensity and directness with which he used harmony, counterpoint, rhythm, and articulation to serve maximum expressive purposes. Another important feature of Skalkottas's music is the presence of Greek folk material in his works. For a period, he professionally transcribed and analyzed Greek folksongs. Of particular interest is his integration of folk elements in his atonal composition, most notable in his famous collection of Greek Dances for orchestra.

In his 25-year long career, Skalkottas composed more than 170 works, often short, but sometimes of "gigantic" dimensions and of remarkable sophistication and complexity. Manuscripts for over 110 works are gathered at the Skalkottas Archives in Athens, representing more than 80% of his work (since the missing ones are generally quite short). BIS has recently released three recordings of his orchestral and chamber music (BIS CD-1014, BIS CD-1024, BIS CD-904). His three Piano Concertos, Concerto for Violin, Viola and Wind Orchestra, Greek Dances, Symphony in One Movement ("The Return of Ulysses") and Symphonic Suite are among his key works. Gunther Schuller is currently recording Skalkottas's Piano Pieces Volumes I--III.

This is an emotionally complex, interesting piece, restless, but structured, and Gil Rose and the orchestra delivered it authoritatively.