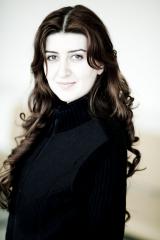 Highly acclaimed for her unique style, colourful tone and dazzling virtuosity, 25-years old Nareh Arghamanyan is one of the promising talents of her generation.

Highlights in the 2014/15 season include her recital debuts at Tonhalle Dusseldorf and at Montreal Museum of Fine Arts. She appears for the first time in the main hall (“Goldener Saal”) of the Musikverein Vienna, performing Khachaturian’s piano concerto with Radio-Symphonieorchester Vienna. Elsewhere she appears with the Staatskapelle Weimar, the St. Gallen und Munich Symphonies and gives her Portuguese debut with the Gulbenkian Orchestra in Lisbon, followed by her Danish debut with the Copenhagen Philharmonic. Across the Atlantic up-coming appearances include the Des Moines Symphony and in Asia she performs with the Kyoto Symphony.

In 2011 she signed an exclusive recording contract with Pentatone releasing a CD of solo works by Rachmaninov and a disc featuring the Liszt concertos, recorded with the Rundfunk-Sinfonieorchester Berlin and Alain Altinoglu (2012). This season she was named Pentatone’s Artist of the Season. Her latest recording includes piano concertos by Khachaturian and Prokofiev the disc of which is scheduled for release in autumn 2014. Future recording plans include the piano concertos by Saint-Saëns with Orchestre de chambre de Paris and Lawrence Foster.

Born in Armenia in 1989, she started playing the piano when she was five. Three years later she began her studies with Alexander Gurgenov at the Tchaikovsky Music School for Talented Children in Yerevan. In 2004 she was the youngest student to be admitted to the University for Music and Performing Arts Vienna, where she studied with Heinz Medjimorec and chamber music still with Avedis Kouyoumdjan. Currently she continues her studies with Arie Vardi in Hannover and with Avedis Kouyoumdjan in Vienna.