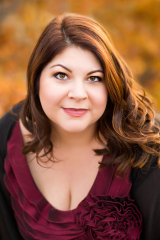 Opera News hailed that "Michelle Trainor gave one of the most satisfying performances of the evening...her voice is richer and more expressive than ever" for her portrayal of Brangain in Boston Lyric Opera’s The Love Potion. The Musical Intelligencer has called her performance of Hagar’s Lament "spell-binding and intense" and The Wall Street Journal acclaimed that she "displayed a powerful, penetrating soprano as Brangain." Michelle performed with the Tuscia Opera Festival in Viterbo, Italy where she was praised by Filippo Tadonlini for her "intense and full-bodied vocalism".

Michelle makes her Boston Modern Orchestra Project debut singing Oneeta/Princess/Batcheat in Haroun and the Sea of Stories. She also debuted four other roles in the 2018/2019 season. She opens the season singing Benoni in La Reine de Saba by Gounod with Odyssey Opera followed by Berta in Il Barbiere di Siviglia, with Boston Lyric Opera. In the spring she will be singing Ofglen in The Handmaid’s Tale with Boston Lyric Opera as well as her return to Emmanuel Music singing Mrs. Peachum in Britten’s The Beggar’s Opera.

In the 2017/2018 season Michelle created the role of Helen McDougal in the World premiere of Julian Grant’s The Nefarious, Immoral but Highly Profitable Enterprise of Mr. Burke & Mr. Hare with Boston Lyric Opera. She will also be debuting the role of Mrs. Peachum in Weill’s The Threepenny Opera with Boston Lyric Opera as well as Jocaste in Stravinsky’s Oedipus Rex with Emmanuel Music. She will be returning to the Nashua Symphony as the soprano soloist in Beethoven’s Ninth Symphony and will join the SNHU and Manchester Chorale as the soprano soloist in Mahler’s Symphony No. 2.

The 2016/2017 season, along with her Boston Symphony Orchestra debut in Der Rosenkavalier she joined the Brookline Symphony Orchestra for Isolde’s Liebestod from Wagner’s Tristan und Isolde. Michelle returns to the Boston Lyric Opera stage to sing the role of Marcellina in Le Nozze di Figaro, will make her Odyssey Opera debut as Ghita in Zemlinsky’s Der Zwerg and will be the soprano soloist in Vaughan Williams’ A Sea Symphony with New World Chorale.

2015/2016 season brought Michelle back to New Hampshire at First Church where she sang Nicholas White's Magnificat. She reprised the role of Tosca with La Forza dell' Opera in Brooklyn, NY and performed in the Boston Lyric Opera production of The Merry Widow.

In past seasons she took on the challenging role of Brangain in Martin's The Love Potion to much critical acclaim and she revived her role as Suor Angelica where she was nominated by ArtsImpulse for Best Female Performer in an Opera. Ms. Trainor sang a staged version of Schubert's early song Hagar's Lament and recorded this production on the BIS label.

Equally at home with concert repertoire, Ms. Trainor has performed works such as Mozart’s Requiem, Mass in C Minor, Solemn Vespers and his Missa Brevis in B Flat as well as Mahler’s Eighth Symphony, Beethoven's Ninth Symphony, Haydn’s Missa in Angustiis and Vaughn Williams’ A Sea Symphony. Ms. Trainor made her Carnegie Hall debut as a soloist in Mahler’s Eighth Symphony with Canterbury Choral Society. She has performed at Boston’s First Night and has sung works with the Composers in Red Sneakers where she was described as having a "huge yet flexible sound and excellent diction" by the New Music Connoisseur. She joined the stage with Boston Ballet in their production of A Midsummer Night’s Dream as the soprano soloist.