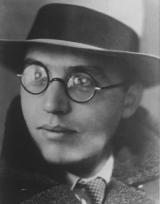 The son of a cantor, Kurt Weill (1900-1950) was raised in a religious Jewish home in Dessau, Germany. He took an early interest in music; his first teacher was Albert Bing, conductor at the local opera house. At eighteen, Weill went to Berlin, experiencing its political and artistic ferment firsthand. A few months' study with Engelbert Humperdinck did not satisfy him, but late in 1920 he began an intensive association with Ferruccio Busoni in the composition seminar at the Akademie der Künste. By the end of 1923, he had had five full-length works performed in Germany. The next few years brought further success: a popular violin concerto and his first opera, The Protagonist (1926, Georg Kaiser). Through Kaiser, Weill met the actress Lotte Lenya in Berlin in 1924, and they married in January 1926. They were divorced from 1933-1937, but they remarried and stayed together until his death.

Weill's early works show the influence of post-romanticism, expressionism, even atonality. Yet the desire to create "freer, lighter, and simpler" music grew on him. The early operas Royal Palace (1927) and The Czar Has his Photograph Taken (1928) show the influence of jazz and popular music. He began working with Bertolt Brecht in the spring of 1927, setting the "Mahagonny" poems. Mahagonny's hummable tunes and thoroughgoing popular influence seemed calculated to shock the avant-garde; the charge that he had "sold out" to commercialism and abandoned art followed him thereafter. Later compositions, like The Threepenny Opera and Rise and Fall of the City of Mahagonny elaborated on his popular style. But a much different style animates other works with Brecht, such as He Who Says Yes, an opera for students, and The Lindbergh Flight, a cantata.

The collaboration with Brecht ended around 1930, and Weill's last two compositions in Germany were written with others: The Pledge (1932, Caspar Neher) and The Silver Lake (1933, Georg Kaiser). Hitler's ascent in 1933 forced Weill to leave Germany, never to return. He spent two frustrating years in Paris, finding little sympathy for his new compositions: The Seven Deadly Sins (1933, Brecht), A Kingdom for a Cow (1935, Robert Vambery), and the Second Symphony (1934). His work on The Eternal Road (1937, Franz Werfel), a pageant based on the Old Testament, brought him to the U.S. in September 1935.

Weill's American career was as active as his European career. He had two major successes on Broadway: Lady in the Dark (1941, Moss Hart and Ira Gershwin) and One Touch of Venus (1943, Ogden Nash and S.J. Perelman). His most important works for Broadway, at least in terms of influence, were probably Street Scene (1947, Elmer Rice and Langston Hughes) and Love Life (1948, Alan Jay Lerner). Weill considered Street Scene a "Broadway opera," and his project of making opera more palatable to Broadway audiences was carried forward by Menotti, Blitzstein, and Bernstein. Several experts have pointed to Love Life as the precursor of the "concept musical," influencing Fosse, Sondheim, and Kander & Ebb. All together, he brought eight shows to Broadway and saw three other stage works produced in the U.S.

Weill's constant hard work and family history of hypertension caught up with him early in 1950. While his last work, Lost in the Stars (1949, Maxwell Anderson), still ran on Broadway, and shortly after he and Anderson had begun a musical version of Huckleberry Finn, Weill had a heart attack and was hospitalized in New York City, where he died on April 3.