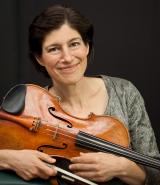 Winner of the 2013 Grammy Award for Best Classical Instrumental Solo Album for her recording Kurtág/Ligeti Music for Viola, Kim Kashkashian is recognized internationally as a unique voice on the viola. In 2014 Kim was awarded the George Peabody Medal for outstanding contributions to music in America, as well as the prestigious Golden Bow award of Switzerland. A staunch proponent of contemporary music, she has developed creative relationships with György Kurtág, Krzysztof Penderecki, Alfred Schnittke, Giya Kancheli, and Arvo Pärt, and premiered commissioned works by Peter Eötvös, Betty Olivero, Ken Ueno, Thomas Larcher, Lera Auerbach, and Tigran Mansurian. Kashkashian has ongoing duo partnerships with pianist Robert Levin and with percussionist Robyn Schulkowsky, and has appeared as soloist with the orchestras of Berlin, London, Vienna, Milan, New York and Cleveland in collaboration with Eschenbach, Mehta, Welser-Moest, Kocsis , Dennis Russell Davies, Blomstedt, Robertson, and Holliger. Recital appearances include the great halls of New York, Boston, Philadelphia, Pittsburgh, Cleveland, Frankfurt, Berlin, Paris, Athens, and Tokyo. Her association with the prestigious ECM label since 1985 has resulted in a rich discography which includes the complete sonatas of Hindemith and Brahms; an album of Argentinian songs; the concertos of Schnittke, Bartók, Penderecki and Kurtág, as well as the Bach viola da gamba sonatas, recorded with Keith Jarrett. Kim Kashkashian lives in Boston, where she coaches chamber music and viola at New England Conservatory. She is a founding member of Music for Food, an initiative by musicians to fight hunger in their home communities (musicforfoodboston.org).

The string section is a staple of any orchestra: The largest of the instrumental sections, the strings are the most prominently displayed. Strings are usually the most constant factor in any orchestral score, while woodwinds, brass, percussion are the variables. Perhaps it is ironic that the fate of the string section is to play some of the least sonically interesting parts. Strings are often consigned to betraying their vast range of timbre and tone color to complement and support more strident colors of other sections of the orchestra.

Centuries of upheaval have made the Armenian diaspora one of the world’s largest; by some estimates, almost three times as many Armenians live outside the country as in it. Charting Armenian music and inspiration, the Boston Modern Orchestra Project’s season finale, “Armenia Resounding,” balanced perspectives from within and without.