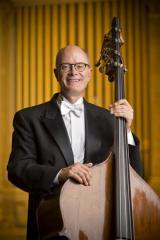 Edwin Barker is recognized as one of the most gifted bassists on the American concert scene. Acknowledged as an accomplished solo and ensemble player, Mr. Barker has concertized in North America, South America, Europe, and the Far East.

Mr. Barker graduated with honors from the New England Conservatory in 1976, where he studied double bass with Henry Portnoi. That same year, while a member of the Chicago Symphony, he was appointed at age 22 to the position of principal double bass of the Boston Symphony Orchestra. His other double bass teachers included Peter Mercurio, Richard Stephan, Angelo LaMariana, and David Perleman.

Mr. Barker is an Associate Professor at the Boston University College of Fine Arts where he teaches double bass, orchestral techniques, and chamber music. His other major teaching affiliations include the Boston Symphony Orchestra’s Tanglewood Music Center, where he was Chairman of Instrumental and Orchestral Studies from 2004 to 2012.

With deliberate gestures, Rose conjured fine playing from the orchestra, the musicians laying a sturdy frame of accompaniment.