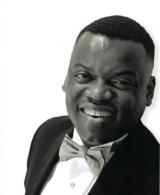 Baritone Dana Whiteside has two careers. In addition to singing at Emmanuel Music and elsewhere he serves as Deputy Director for Community Economic Development for the Boston Redevelopment Authority (BRA). Although his life is a juggling act, Whiteside is more fulfilled living in two worlds with complementary roles. He even finds that he is a more effective manager because of his commitment to a life in music.

The two strains of business and music run through Whiteside's life. In college at Holy Cross he was called the "Renaissance economics major" because he combined his economics and accounting classes with lead performances in a number of musical theater pieces (Sky Masterson in Guys & Dolls, the Emcee in Cabaret) – with some track and field on the side for good measure! Whiteside also discovered the oratorio repertoire in college, soloing in the Faure Requiem and singing the tenor solos in Bach's Christmas cantatas.

Though Whiteside considered music a hobby and was headed from college into the insurance business, his choir director pulled him aside and told him he had a gift he might want to develop. Whiteside remembered the advice and took it to heart. As he worked in the business world he began voice lessons and took music theory classes. He also sang in the Trinity Church choir.

At some point the balance shifted again. "I decided to follow my passion and go to graduate school in music," Whiteside says. He entered the three-year Master's opera program at NEC and loved the experience and training. "But after graduation I had my starving artist years," he explains. "I auditioned for roles in opera and musical theater and waited tables to cobble together a living. I had some roles at the Boston Lyric Opera and elsewhere, but ultimately the quality of life was diminishing. There wasn't enough music-making and I felt as though I lost my love of music as I had to make choices like paying the rent or taking a music lesson."

Whiteside considered a change carefully, taking time for some soul-searching. "I strive to be intentional in my life," he explains. As Whiteside began to chart a path back into the business world, he remembered how NEC leaders Laurence Lesser and Ben Zander had talked broadly about the different ways to have a life in music. Confident that he could return to business without leaving music behind, Whiteside developed a career in banking that lasted six years. He rounded out his life singing at Trinity and taking the time for freelance choral and solo engagements while learning the baritone repertoire.

Before his singing career blossomed, Whiteside looked for his ideal professional job. He sought informational interviews in a number of organizations involved with community planning and philanthropy – fields he'd learned about working at Fleet Bank's Trust Department. Whiteside's careful planning paid off when the Director of Economic Development at BRA hired him to be her chief of staff. That was almost ten years ago, and his knowledge of finance and ability to manage processes and projects with senior staff has made for a productive and successful career.

Whiteside's most satisfying work with the BRA has been the success of the Mattapan Economic Development Initiative. "I see my role as a shepherd leading the experts – nurturing the ideas, talents, and gifts of others and creating an organizational context that makes it easier for them to do their best work and make change happen. Success here is manifested because community stakeholders have taken over my role and are implementing some of the changes recommended in our final report."

But something interesting happened on the way to Whiteside's professional development. "As I settled into my BRA work of problem-solving and strategic planning, my ability to engage in musical activities also increased," Whiteside says. He found himself being asked to perform as soloist with multiple groups – at Trinity Church, with the Dedham Choral Society and the Cantata Singers, and in varied repertoire such as Bach's St. John Passion, Orff's Carmina Burana, Beethoven's Ninth Symphony. Whiteside also found a way to perform the lieder and art song recitals he loves so much. "I sang recitals with Vox Humana at St. Paul's Church in Jamaica Plain and most recently with the Florestan Recital Project. But I also acted entrepreneurially and went to libraries with concert series and offered to perform. As a result I was able to give recitals at Brookline Public Library and the French Library."

Among Whiteside's favorite recital partners is James Johnson, a friend also juggling a professional career with a life in music. Johnson, a professor of history at Boston University, is also a trained concert pianist. He and Whiteside have started a concert/lecture series that has become "a major source of artistic sustenance for both of us," Whiteside says.

Whiteside finds himself at a special point in his two careers. "At the BRA I sit at the feet of people who have shaped the city and work with them to make new changes. And speaking as a person of faith, I approach my music as one of the gifts I've been given to share with the world. Before I open my mouth to sing, I always thank God for the opportunity to be here and offer this gift."