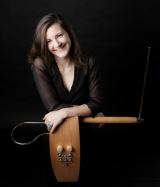 Carolina Eyck is a German-Sorbian musician and composer, largely recognized as the world's leading theremin virtuoso. She was awarded the Echo Klassik Prize for "Concert Recording of the Year" in 2015. Of her 2019 Tiny Desk concert, NPR reports, "to play the theremin like Eyck does, with her lyrical phrasing and precisely 'fingered' articulation, takes a special kind of virtuosity." Electronic Musician proclaims, "Eyck modernizes the theremin, merging it within the classical tradition like child's play," while Textura states, "Carolina Eyck has done much to rid the theremin of its gimmick status and legitimize it as an instrument that can credibly take its place in any number of serious music contexts." Cicero calls her the "queen of the theremin."

Carolina Eyck was a child prodigy, beginning her studies at age seven with Lydia Kavina and developing her own eight-finger-position playing technique by age 16. She published The Art of Playing the Theremin, which teaches her technique, at just 17 years old. Her method is now being used by thereminists around the world and has revolutionized how the instrument is played. As a soloist and chamber musician, Eyck has given concerts worldwide, and has collaborated with Heinz Holliger, Robert Kolinsky, Gerhard Oppitz, the conductors Andrey Boreyko, Michael Sanderling, Gurer Aykal, John Storgards and Brad Luhman. She has been a soloist with the Berlin Radio Symphony Orchestra, Brussels Philharmonic, Argentine National Symphony Orchestra, the Dresden Philharmonic, the Bern Symphony Orchestra, the Lapland Chamber Orchestra, and the Heidelberg Symphonic Orchestra.

In 2016, Carolina Eyck began touring her innovative solo Theremin & Voice program. Employing loops and a variety of sound effects, she develops whole choirs onstage and extends the theremin's color palette. By singing without lyrics, voice and theremin merge symbiotically and can no longer be distinguished from each other. Eyck's next album, Elegies for Theremin and Voice, features her original compositions and improvisations and will be released in September 2019 in connection with the 100th anniversary of the invention of the theremin.

Carolina Eyck's transcription of Ennio Morricone's The Ecstasy of Gold has been viewed more than 15million times online. She enjoys collaborating with contemporary artists from a variety of genres, and has performed or recorded with rock legend Steve Vai, singer-songwriter Gotye, DJ Jeff Mills, guitarist Jim Moginie, Tangerine Dream, multi-instrumentalist Jacob Collier, and vocalist Theo Bleckmann, among others. Eyck has also performed in a duo with pianist and composer Christopher Tarnow since 2013, producing two records. In 2016, she released an album featuring her own composition Fantasias for Theremin and String Quartet with the American Contemporary Music Ensemble.

Carolina Eyck regularly conducts theremin workshops, lectures, and master classes worldwide. She is the artistic director of the Theremin Academy in Colmar (France), Leipzig, and Berlin (Germany). In 2018, she gave a TEDx Talk about the symbiosis of self-control and freedom while playing the theremin. A documentary about her work, Carolina and the Waves, is currently in production. Highlights for Eyck's 2019-2020 season include solo performances with the BBC Philharmonic, Boston Modern Orchestra Project, and Albany Symphony, as well as a U.S. tour in connection with the release of her album, Elegies for Theremin and Voice. Recent U.S. highlights include performances presented by the National Gallery of Art, Strathmore Mansion, and San Francisco Ballet.