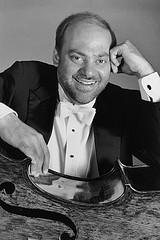 Anthony D'Amico, has served as principal bass of the Boston Modern Orchestra Project since its inaugural concert in 1996. Originally from Long Island, New York, Mr. D'Amico is in demand as a freelance musician throughout the New England area. His playing has been hailed by The Boston Globe as "perfection itself." Along with his position with BMOP, he is principal bass of the Boston Philharmonic Orchestra and the Opera Boston orchestra. He is a member of the Rhode Island Philharmonic, the Portland Symphony Orchestra, and the Springfield Symphony Orchestra. In recent summers, he has served as principal bass of the New Hampshire Music Festival orchestra, and also participates in the Sebago-Long Lake Chamber Music Festival of Maine. An avid champion of new music, he has performed in numerous premieres of symphonic and chamber music with BMOP and other ensembles. A versatile artist, Mr. D'Amico's career routinely encompasses a myriad of styles including symphonic orchestras, chamber music, jazz ensembles, and musical theater productions. He is a dedicated educator, and serves on the faculties of the New England Conservatory Preparatory Division, the Walnut Hill School, and Project STEP. Mr. D'Amico is an alumnus of the Hartt School of Music and New England Conservatory.