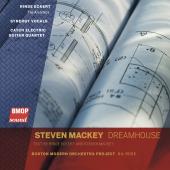 Steven Mackey’s Dreamhouse is and odd assemblage dealing with, as the title suggests, the building of a perfect home, with a libretto filled with architectural details improvised on by Mr. Mackey and tenor and fellow librettist Rinde Eckert. In addition to Mr. Eckert, who sings not only as tenor but with falsetto, and functions as speaking actor as well, the work is scored for a small Hilliard Ensemble-type vocal consort, an electric guitar quartet, and large orchestra. The music is varied in its influences, but is unambiguously American in tone and aesthetic stance.

The Grammy Awards are Sunday night in Los Angeles, and sure, big national music names like Lady Gaga, Justin Bieber and Neil Young will be waiting to hear if they’ve won. But Boston’s talent will be well-represented, too.

And The Nominees Are… Harpist Sarah Schuster Ericsson

It was a big decision, but harpist Sarah Schuster Ericsson finally settled on what to wear to the ceremony in LA — a long, light-gray silk gown with a scooped back. She even modeled it for me in her bedroom.

Steven Mackey is a busy guy. In addition to playing the guitar and teaching music at Princeton, he composes some very large scale musical works, like Dreamhouse, his piece for singer/actor, vocal quartet, electric guitar quartet, and orchestra, which was commissioned for the Holland Festival in 2003.

Miss Music Nerd Full review
[CD Review] Gramophone reviews Steven Mackey: Dreamhouse
Musical works are often analysed and described in architectural terms, but how many are actually about architecture? Steven Mackey’s Dreamhouse takes up the subject with explosive and ethereal imagination. Scored for vocal quartet, electric guitar quartet and orchestra, the piece is a rumination on the design and construction of the eponymous house, complete with Architect as speaking and singing narrator. Mackey’s mastery of musical styles, from oldest to the most recent, allowed him to fill his three-part extravaganza with a cavalcade of disarming and jolting sonic ideas.
Gramophone Full review
[CD Review] Audiophile Audition reviews Steven Mackey: Dreamhouse

First, I will clarify what I went straight to the booklet notes to find out. Rinde Eckert is the co-author of the libretto and sound design for this very unusual, not unpleasant – just kind of weird - project. In this sense, then, he does deserve credit and kudos for the project; a kind of “architect” in the sense of the piece as well as the figurative “architect” of the “dream house” of the title.

Local musicians have seized four nominations at this year’s prestigious Grammy awards, presented every year by the American Academy of Recording Arts and Sciences. The Mariinsky label’s recording of Rodion Shchedrin’s opera The Enchanted Wanderer performed by the Mariinsky Theater Symphony Orchestra and Chorus under Valery Gergiev is a finalist in two categories: “Best Opera” and “Best Work by a Contemporary Classical Composer.”

IODA, the global leader in digital distribution, marketing, and technology solutions for the independent music industry, today announced that among the 53rd annual Grammy nominations, 49 are from the IODA family of rightsholders. The nominations reflect the success of more than 35 artists from more than 25 independent record labels distributed by IODA. IODA clients received nominations in more than 15 genres, showcasing the significant contributions and success of independents across the music industry.

Nominations for the 53rd annual Grammy Awards ceremony have been revealed.

In the 14 categories in which classical recordings are eligible, 30 record labels received a total of 67 nominations between them, with Naxos, with a tally of 11, receiving the most nominations. Attracting six nominations each, Harmonia Mundi and the Winchester, Virgina-based independent Dorian Sono Luminus were the next most successful labels, while Decca was nominated five times.

With the announcement of this year’s nominees, the Grammys had two words for its conservative past: “(expletive) You!”

Independent labels such as Naxos, Harmonia Mundi and Dorian, have earned more than 20 Grammy nods, edging out major, legacy labels like RCA, EMI and Sony. Michael Daugherty’s Metropolis Symphony (on Naxos) is at the top with five nominations.

NPR Full review
[News Coverage] And the Grammy nominees are

The 53rd Annual Grammy nominations have been announced (list of nominees in the Classical category here). Lots of contemporary classical represented, even in the more general categories.

Congratulations to Steve Mackey and Michael Daugherty: both are up for Best Classical Album. The ensembles that recorded their works, BMOP and the Nashville SO, respectively, are also up for Best Orchestral Performance.

So many categories, so many shiny gold statues to be distributed! The Grammy award nominees have been announced, with Michael Daugherty’s Metropolis Symphony; Deus Ex Machina (Naxos) disc picking up six nominations and Steven Mackey’s Dreamhouse snagging three.

In the “Best Classical Contemporary Composition” category (given to a “contemporary classical composition composed within the last 25 years, and released for the first time during the eligibility year”), the nominees are:

The classical nominations for the 53rd annual Grammy Awards feature a sprawling mix of musicians and composers from around the world. Leading the nominations are Michael Daugherty’s Deus Ex Machina, for piano and orchestra, with five nods, and Steve Mackey’s Dreamhouse, an eclectic orchestral work, with three nods.

BMOP/sound, the nation's premier label launched by an orchestra and dedicated exclusively to new music recordings, announced its much anticipated CD release, Steven Mackey: Dreamhouse. The recipient of numerous awards, including a Guggenheim Fellowship, a Charles Ives Scholarship from the American Academy of Arts and Letters, two awards from the Kennedy Center for Performing Arts, and the Chamber Music Society of Lincoln Center's Stoeger Prize, Steven Mackey (b. 1956) has established himself as an American iconoclast pioneering the new music scene.