Reza Vali: Toward That Endless Plain 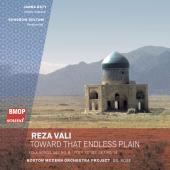 Reza Vali: Toward That Endless Plain has garnered critical acclaim.

Iranian-American composer Reza Vali (born Ghazvin, 1952) has been called the Iranian Bartók. This is apt not because his musical style is especially influenced by Bartók (in fact, Vali claims among his influences Wagner, Mahler, and Debussy, and I detect others as well) but because like Bartók, he’s a dedicated student and cataloger of folk song.