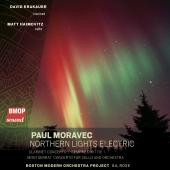 Paul Moravec’s music, for me, is consistently bracing, exhilarating and entertaining. His music is written in a style and language that speaks to the logical continuation of some of the great American masters; such as Copland, Schuman and Thomson. He has written in every genre including some recent outstanding contributions to opera. Moravec won the Pulitzer Prize in 2004 for the Tempest Fantasy, a chamber quartet I personally love!

"Location, location, location" is the mantra of real estate, but for centuries geographical locales have also been a boon to the imagination of many a composer. Think of Tchaikovsky, who mimicked the bugle calls he heard each morning while visiting Rome in the opening brass fanfare of his Capriccio Italien. Or Mendelssohn's undulating waves of sound swelling in the Hebrides Overture, his ode to a craggy seaside cave in Scotland.

An album of orchestral works by Pulitzer-winning composer Paul Moravec, "Northen Lights Electric" was recently released on Boston Modern Orchestra’s house label, BMOP Sound. From the sparkling energy of the title track to the luscious cello concerto Montserrat, performed by Matt Haimovitz, Moravec’s music is full of cinematic sweep without predictability or sentimentality.

Northern Lights Electric, the title track on the Boston Modern Orchestra Project's 24th(!) self-released recording in five years, demonstrates just how finely matched the Project is to the album's star composer, Paul Moravec. The polished sort of pleaser that could effortlessly raise the curtain on a subscription concert, this is a symphonic poem for people who love symphonic poems.