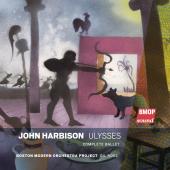 “Rose and BMOP are expert champions of this neglected score...a compelling achievement.” (Gramophone)

As a grand ballet, Harbison’s immense Ulysses is something of an enigma and an anachronism: The composer fills 80 minutes absent a hope for choreography with a lissome program and vocabulary that recall music of a less dissonant era. There’s even an ondes Martenot—for Circe of course. We detect throughout sly touches and eloquence the Boston Modern Orchestra Project (BMOP) handles with aplomb. BMOP appears to have assumed the mantle once held by the Louisville Orchestra, shepherding and recording a swath of modern, if not quite modernist, music.

The major classical recording labels, a few notable exceptions aside, seemed determined to continue their march toward irrelevance and oblivion this year. For independent outfits the prognosis was better: The budget-priced Naxos reigned supreme, while hardy concerns like Hyperion, Kairos, Testament and Bridge produced invaluable offerings. But some of the most robust activity in 2008 involved labels operated by those with the most to gain: musicians, orchestras, composers.

One of the reasons John Harbison (b. 1938) is now probably our country’s premier serious composer is the comprehensive range of his catalog. He has made a conscious effort to address all of the various classical genres, from a three-act opera to many kinds of miniatures, both vocal and instrumental.

John Harbison began composing a full-length ballet based on the legend of Ulysses in the 1980s without any prospect of a staged performance. The ballet’s second act, “Ulysses’ Bow”, was played in concert and recorded by André Previn and the Pittsburgh Symphony in 1984 but the complete score didn’t come off the shelf until 2003, when the Boston Modern Orchestra Project, led by Gil Rose, brought it to belated life. Their efforts were eminently worthwhile, as the recording of the entire work released on their own label confirms.

John Harbison’s ballet Ulysses (1984, rev. 2003) was inspired by the final scenes from Monteverdi’s Ritorno d’Ulisse, where the hero strings his bow and goes on to win back both his kingdom and his wife. The ballet is in two large parts, ‘Ulysses’ Raft’, and ‘Ulysses’ Bow’, the latter having been previously recorded by the Pittsburgh Symphony on Nonesuch. This is the first recording of the complete ballet, which (incredibly) still awaits staging.

A Neo-Romantic smash. John Harbison has always commanded the respect of his fellow composers, although the public at large, I think, has yet to tumble to him. He has written music in every genre, including a few operas, concerti, sonatas, religious choral works, oratorio, and string quartets. He studied with Piston, Sessions, Kim, Blacher, and Dallapiccola, among others, and ended up going his own way. He has received the MacArthur “genius” award.

John Harbison’s Ulysses ballet is undoubtedly one of his most colourful, accessible works, and a far cry from the cool convolutions of his Great Gatsby opera. Fragments of the ballet floated around the concert world during the 1980s, but the first complete performances and recording did not occur until the Boston Modern Orchestra Project and Music Director Gil Rose undertook this truly heroic task in 2003.

It’s hard to believe that Pulitzer prizewinning composer John Harbison, who turns seventy this year, composed a full length ballet nearly a quarter of a century ago and it has yet to be staged. Ulysses (1984/rev, 2003), has been played piecemeal by various orchestras over the years; Andre Previn and the Pittsburgh Symphony recorded its second act, “Ulysses’ Bow,” for Nonesuch; but it wasn’t until 2003 that an orchestra performed the work in its entirety.

Four out of five stars

John Harbison’s Ulysses has been a long delayed release, but, anxiously awaited, it was composed in 1983 and is also the inaugural release from the new music recording label BMOP/sound. Indeed it is a wonderful first CD by the new label.

The news these days about the classical music recording industry is almost always bleak, so it’s a pleasure to report a bright spot on that landscape: the Boston Modern Orchestra Project has finally launched its own record label called BMOP/sound.

Many of us remember a 1986 Nonesuch recording of an exciting orchestral piece by American composer John Harbison (b. 1938) called Ulysses Bow (later released on First Edition, but no longer available). However, upon reading the album notes, we discovered much to our chagrin that it was only the last half of a full-length ballet. With this enterprising release from BMOP/sound, we now have the complete score.

Critics Rating: 4 out of 5 stars

Since its 1996 inception, the Boston Modern Orchestra Project (BMOP for short) has quickly pushed its way to the forefront of contemporary-music organizations in this country. Under the leadership of conductor Gil Rose, BMOP’s founder and artistic director, the ensemble has presented nearly 40 premieres, half of which it commissioned. It has also been active on the recording front, issuing 13 discs on a variety of labels.

At a time when pundits continue to predict the death of physical recordings, the always-against-the-grain Boston Modern Orchestra Project (BMOP) has launched a new CD label, BMOP/sound. Their initial release is the first complete recording of John Harbison’s 1984 ballet Ulysses. Nine additional releases are scheduled to come out a month at a time for the remainder of 2008.