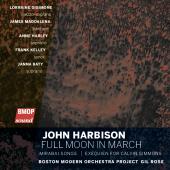 Full Moon in March (1977) is John Harbison’s adaptation of a nasty Yeats “chamber play” dealing with the beheading of a filthy Swineherd (James Maddalena) who dares to court a bitchy virgin Queen (Lorraine DiSimone). His head winds up impaled on a stake, and the Queen does a hysterical dance (soprano DiSimone is replaced by a dancer). The piece is a small-scale but demonstrative Salome substitute set in Harbison’s pungent 70s Princetonian-Stravinskian style, his scoring embroidered with colorful prepared piano sonorities in the small accompanying ensemble.

It remains a mystery why certain labels send their CDs to us. Like for instance BMOP/sound. It is a difficult job to cover these two of their new releases. They fall beyond the scope we usually cover. So I will be very descriptive only on these two. But first the label itself. It is the outlet of the Boston Modern Orchestra Project. They perceive it as their mission to record important classical compositions of the 20th and 21st century. These two releases may illustrate this.

John Harbison’s music is almost always engaging on an intellectual level—imaginative, ingeniously inventive, and distinctively orchestrated—but in spite of its essentially lyrical impulse, it can have a cold brilliance that doesn’t leap out to touch the emotions. The three works recorded here, written in the late ‘70s and early ‘80s, appeal as much to the senses as to the intellect, making this one of the most attractive releases of the composer’s music.

This recording from Gil Rose and the Boston Modern Orchestra Project includes two of John Harbison’s prominent vocal works, the Mirabai Songs and his opera, Full Moon in March. The former is based on a text by a 16th-century Indian mystical poet and street-dancer, while the latter is loosely adapted by the composer from a play by William Butler Yeats. The last piece on this recording is an elegiac tribute to Calvin Simmons, a young conductor of the Oakland Symphony who died in a boating accident.

BMOP/sound, the nation's foremost label launched by an orchestra and devoted exclusively to new music recordings, today announced the album release of John Harbison: Full Moon in March. Pulitzer Prize-winning composer John Harbison is one of America's most prominent artistic figures. As part of BMOP's ongoing effort to perform, record, and disseminate Harbison's significant, early works, the album includes two vocal works: his chamber opera, Full Moon in March (1977), which is based on W.B.