Gunther Schuller: The Fisherman and His Wife 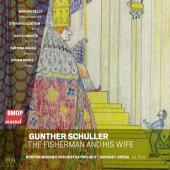 The late Gunther Schuller (1925-2015) was enormously influential on the American musical scene as I grew up. He was a Modern composer of great breadth and originality, one of the main forces behind so-called Third Stream Music which sought to meld Classical and Jazz, a major innovator in music education in his leading role at the New England Conservatory, and a musicologist and author of great consequence, writing among other things the classic Early Jazz.