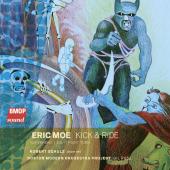 This recording captures Moe’s “fascination with the musical shape-shifting made possible by trap set percussion.”

Composer, pianist, teacher Eric Moe is a busy man. Not only does he compose, quite often on commission; teach composition and theory at the University of Pittsburgh; and occasionally lend his keyboard talent to the cause of other composers, he is also codirector of the Music on the Edge, a new-music series that brings many of the leading lights of contemporary music to the city.

Kick & Ride proves an apt title for composer Eric Moe's recent BMOP Sound release, highlighting his use of drum set and percussion throughout the three compositions represented. The high energy works, characterized by Moe in the liner notes as "cantankerous sisters," indeed deliver shots of dramatic flair and suspenseful anxiety that could nearly persuade a listener to skip that all-important morning cup of coffee.

Warning: Consuming Kick & Ride (the Boston Modern Orchestra Project's newest recording that features three drum-heavy works by Eric Moe) while in anything even hinting at a bad mood could lead to broken mugs at Starbucks, holes in apartment walls or shoving matches on a downtown 6 train platform.

2011 was a very fruitful year for recording projects by members of the Department of Music. Eric Moe, Nathan Davis, Bryan Wright, Donna Amato, and IonSound Project all released new CDs.