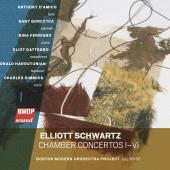 BMOP/sound's release, Chamber Concertos I-VI, is a comprehensive recording featuring the six chamber concertos of Elliott Schwartz. Spanning more than thirty years of his compositional career, these works represent a fusion of the solo concerto and the concerto grosso. Moreover, they reflect the composer's fascination with neo-Baroque models in which the virtuoso role is moderated to allow for complex textural possibilities.

The American composer Elliott Schwartz (b. 1936) has carved out a niche in the postmodern movement through his synthesis of 20th-century idioms into a highly individual voice. A native New Yorker and a longtime professor at Bowdoin College in Maine, Schwartz has enjoyed no shortage of international performances, and he has been widely praised for his innovative use of juxtaposition, collage, theatrical gestures, and orchestral color.

Elliott Schwartz’s music uses collage to a great degree. Juxtaposition can be stark, including the use of tonal against the non-tonal. Quotations may be present. He also uses “frame notation” extensively, a technique possibly most famously used by Lutosławski.

This is a fine tribute from the highly acclaimed Boston Modern Orchestra Project to 30 years of Elliott Schwartz’s idiosyncratic output. Each of the six chamber concertos, four in first recordings, features a single soloist in a continuity ranging from monologue to free-ranging superimposed textures. Schwartz describes his technique as “different strategies for dealing with the ‘concerto’ principle—six variations, not on a theme, but on a genre.” An essential part of his idiom is quotation from older styles, actual or implied but often unobtrusive.

Classical music as we know it is evolving on a daily basis. Orchestras across the world are developing new musical techniques—blending centuries-old practices with modern innovations and creating sounds that bring Bach and Beethoven with 20th century Modernism. At the forefront of these efforts is Boston’s BMOP/sound, the nation’s foremost record company launched by an orchestra. The record company already has a dozen albums under its belt and is celebrating its 13th album— Elliott Schwartz: Chamber Concertos I-VI.

These six little concerti are typical of Schwartz’s gleefully eclectic style, the presentation of the many facets of which is facilitated through his espousal of a deep- and wide-ranging use of ‘collage’ technique. What this means in practical terms is that the music presents a kaleidoscopically shifting assemblage of layers of material, which can range from literal quotations of classical or romantic models in their original tonal language to reminiscences of the styles of earlier music (of many kinds) to frankly atonal, abstract and complex gestures.

These works were composed over a span of 30 years from 1976 to 2007; 3 of them (Nos. III, V, and VI) were revised (with one, No. III, now with the subtitle “Another View,” having been essentially completely reconstructed) for the performances and subsequent recording by BMOP over the past 2 years. The result is a set of very compelling eclectic pieces that make for enjoyable repeated listening.

The long-awaited CD of all Maine composer Elliott Schwartz’s chamber concertos has finally been released by the Boston Modern Orchestra Project (BMOP/sound, 1013) and it lives up to expectations. Conductor Gil Rose and his orchestra are among the foremost interpreters of modern music, and their performances of these six works, from 1976 to 2007, with the composer’s input, can be considered definitive.

After a 43 year stint at the College, former Robert K. Beckwith Professor of Music Eliott Schwartz has one more accomplishment to add to his list: the recent release of an album featuring six chamber concertos of his own composition.

The album is titled Elliot Schwartz: Chamber Concertos and will be released through the Boston Modern Orchestra Project (BMOP) label this month.

Schwartz, an internationally regarded composer, retired from Bowdoin’s faculty in 2007, with 12 of his 43 years in the music department spent as department chair.