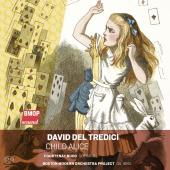 David Del Tredici's name is closely associated with Lewis Carroll’s. Del Tredici’s nine major Alice in Wonderland works, written between 1968 and 1996, were paradoxically daring for their use of tonality during an era of serialist snobbery. After studies at Princeton in twelve-tone composition, Del Tredici slowly moved toward his trademark neo-Romantic style, which he felt was better suited to the Victorian nonsense texts of his favorite author. Child Alice, a 1980 Pulitzer winner, marks the apotheosis of this development.

Alice isn’t the only one who finds herself immersed in enchanting and wild escapades in David Del Tredici’s Child Alice. So do a soprano and especially an orchestra, who engage in glittering, bizarre and clamorous episodes that might prompt Mahler and Strauss to sit up and take notice. The Boston Modern Orchestra Project’s superlative recording of this massive work – six movements and more than two hours of music – certifies the piece’s status as sonic wonderland.