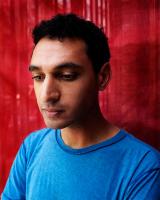 Mohammed Fairouz, born in 1985, is one of the most frequently performed, commissioned, and recorded composers working today. Hailed by The New York Times as “an important new artistic voice” and by BBC World News as “one of the most talented composers of his generation,” his large-scale works engage major geopolitical and philosophical themes with persuasive craft and a marked seriousness of purpose. Fairouz’s cosmopolitan outlook reflects his transatlantic upbringing and extensive travels. His catalog encompasses virtually every genre, including opera, symphonies, vocal and choral settings, chamber and solo works.

As an artist involved with major social issues, Fairouz seeks to promote cultural communication and understanding. Recent major works have included his “grandly ambitious” (Opera News) third symphony, Poems and Prayers interweaves texts of Arab poets Fadwa Tuqan and Mahmoud Darwish, the Israeli poet Yehuda Amichai, and prayers such as the Aramaic Kaddish. His fourth symphony, In the Shadow of No Towers for wind ensemble, about American life in the aftermath of 9/11 premiered in 2013 at Carnegie Hall was described by Steve Smith of The New York Times as “technically impressive, consistently imaginative and in its finest stretches deeply moving.”

Fairouz became the youngest composer on the Deutsche Grammophon label to have an album dedicated to his works with the 2015 release of Follow, Poet. The album includes two works that exalt the transformative power of language: his elegiac song cycle Audenesque and the ballet Sadat. The album has met with broad critical acclaim – praised as “captivating” by the New York Times and receiving “highbrow and brilliant” distinctions in New York magazine’s taste-making Approval Matrix.