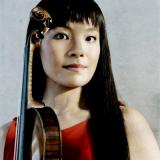 A native of China, the violinist Mira Wang studied with Roman Totenberg at Boston University, from which she graduated with distinction and the prestigious Kahn Award for outstanding musicians.

Mira Wang has appeared with numerous orchestras in the USA, Europe and Asia, including the Staatskapelle Dresden, the Royal Liverpool Philharmonic Orchestra, the Orchestre de la Suisse Romande, the Singapore Symphony Orchestra and the Hong Kong Philharmonic Orchestra. As a chamber musician, she has performed at many international festivals, including the Marlboro Festival, Les Museiques in Basel, the Kuhmo Festival and the MDR Music Summer. She is a regular guest at the Moritzburg Festival, where  she has also directed the Moritzburg Academy for Young Musicians since 2014. Since 2005 Mira Wang has been the artistic director of the exclusive chamber music series Modelroom Musicales at the New York Yacht  Club.

Among the highlights of her concert career are the world premiere of the violin concerto Spring in Dresden by Chen Yi, which she performed with the Staatskapelle Dresden and Iván Fischer, and her appearances as a guest soloist with the American Symphony Orchestra, performing such works as Chain 2 by W. Lutoslawski at New York’s Avery Fisher Hall. In 2010 she gave the world premiere of the Double Concerto by John Harbison with cellist Jan Vogler and the Boston Symphony Orchestra. In October and November 2015 she premiered Wolfgang Rihm’s Duo Concerto on three continents, first with Jan Vogler and the Orpheus Chamber Orchestra at New York’s Carnegie Hall and at the Frauenkirche in Dresden and then with the Singapore Symphony Orchestra under Lan Shui.

The label BERLIN Classics has released several CDs featuring Mira Wang, e.g. the Violin Concerti by Saint-Saëns (accompanied by the NDR Radio Philharmonic) and Prokofiev (with the German Radio Philharmonic Saarbrücken). She has also appeared on recordings for SONY Classical, for example on the Moritzburg Festival’s Mozart production (winner of an ECHO Classical Award) and its Tango album.