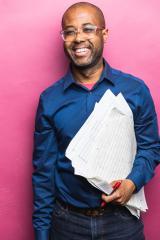 Lavell Blackwell is well-known as a composer, singer, lyricist, and music director and is currently pursuing a Doctorate in Composition at New England Conservatory of Music, studying with Dr. Kati Agócs. He has had the honor of winning NEC’s Honor’s Ensemble Composition Competition twice--for Paces, written for oboe, clarinet, and bassoon, as well as for his string quartet Discarded Vernacular. Both chamber pieces were given world premieres in Jordan Hall.

Additionally, he holds a Master of Music Degree from the New England Conservatory where he studied with Malcolm Peyton, as well as an MFA from New York University. His chamber opera Far Away From America was chosen for the Dixon Place Warning: Not For Broadway Festival, and his musical Keep On Walkin' earned the Anna Zornio Children’s Theater Playwriting Award. His music has also been performed as part of the New York Fringe Festival, the Emerging Artist Theater Festival, and the New York Theater Workshop.

Lavell is also an experienced tenor, and most recently performed with NEC’s Chamber Singers, directed by Erica Washburn. He has sung in not only Jordan Hall, but also Mechanics Hall and the Boston Public Library with the choir. In addition, he was the musical director and pianist for Girl Camp at the Upright Citizens Brigade Theater in New York as well as music director for Fordham Follies at Fordham Law School for two years.