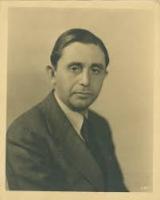 Joseph Schillinger (born Kharkiv, Russia, 31 Aug. 1895, died New York, 23 March 1943) was a theorist, composer and teacher. He studied at the St. Petersburg Conservatory and was also trained in mathematics. After working in Russia as a teacher and conductor he moved to New York in 1928. There he taught in universities and took on private students, usually by mail. Schillinger developed a system of composition that reduced musical elements (and rhythm in particular) to mathematical relationships. Among the many Schillinger students were Tommy Dorsey, George Gershwin, John Lewis, Gerry Mulligan, John Lewis, Oscar Levant, and Carmine Coppola. Schillinger was also associated with Henry Cowell, Leon Theremin and Lev Termen and the use of the “rhythmicon”, an electronic rhythm machine invented by Termen and Cowell. Schillinger’s own works incorporated the use of the theremin within traditional orchestrations.