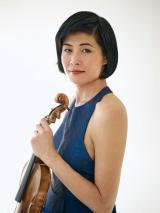 Recognized for intense, commanding performances, delivered with dazzling virtuosity and technical assurance, violinist Jennifer Koh is a forward-thinking artist dedicated to exploring a broad and eclectic repertoire, while promoting diversity and inclusivity in classical music. She has expanded the contemporary violin repertoire through a wide range of commissioning projects, and has premiered more than 70 works written especially for her. Her quest for the new and unusual, sense of endless curiosity, and ability to lead and inspire a host of multidisciplinary collaborators, truly set her apart.

During the 2018-19 season, Ms. Koh continues critically acclaimed series from past seasons, including The New American Concerto, Limitless, Bach and Beyond, Shared Madness, and Bridge to Beethoven. The New American Concerto is an ongoing, multi-season commissioning project that explores the form of the violin concerto and its potential for artistic engagement with contemporary societal concerns and issues through commissions from a diverse collective of composers. This season, as part of the project, Ms. Koh performs Vijay Iyer’s violin concerto Trouble with the Louisiana Philharmonic Orchestra and Vermont Symphony Orchestra. The New American Concerto launched with Ms. Koh’s world premiere performance of Trouble at the 2017 Ojai Music Festival and has since continued with a new concerto by Chris Cerrone titled Breaks and Breaks, which she premiered with the Detroit Symphony Orchestra in May 2018.  Ms. Koh performs music from Limitless, a commissioning project that engages leading composer-performers to write duo compositions that explore the artistic relationship between composer and performer. She and Vijay Iyer perform his piece Diamond for violin and piano at Cornell University, while Ms. Koh also solos in Anna Clyne’s concerto Rest These Hands―a work composed for Ms. Koh―with the Cornell Chamber Orchestra. Later in the season, Ms. Koh performs duos with Mr. Iyerand composer-percussionist Tyshawn Sorey in a Limitless program that also features solo works and an improvised trio performed by the artists, presented by Saint Paul Chamber Orchestra. Limitless launched in March 2018 over two nights at National Sawdust.

Ms. Koh also performs Bach and Beyond, a recital series that traces the history of the solo violin repertoire from Bach’s Six Sonatas and Partitas to 20th- and 21st-century composers, at the Music Institute of Chicago; and Shared Madness, comprising short works for solo violin that explore virtuosity in the 21st century, written for the project by more than 30 of today’s most celebrated composers, as part of the Music on Main Festival in Vancouver. In addition to experiencing Shared Madness in the concert hall, listeners are also able to hear recordings of the premiere performances and interviews between Ms. Koh and the composers via the Shared Madness radio show, which originally aired on WQXR’s New Sounds (formerly Q2) during the summer of 2017 and remains available on demand. Ms. Koh and her frequent recital partner Shai Wosner continue Bridge to Beethoven, which pairs Beethoven’s violin sonatas with new and recent works inspired by them to explore the composer’s impact and significance on a diverse group of musicians, with performances in Baltimore, among other cities. She performs with the Variation String Trio—of which she is a founding member—in Naples and Palm Beach, Florida, as well as at Berkeley’s Hertz Hall as a quintet with pianist Nicolas Hodges and cellist Anssi Karttunen.

Other projects on the horizon include The 38th Parallel: A Contemporary Pansori, which explores the impact of displacement and immigration, and individual and familial transformation through music, visual art, and movement. Conceived by Ms. Koh and composer Jean-Baptiste Barrière, The 38th Parallel connects the transformation of three generations of human lives and encapsulates the experience of cultural uprooting and assimilation. Ms. Koh performs a suite from The 38th Parallel with baritone Davóne Tines and flutist Camilla Hoitenga this season in New York at the Advent Lutheran Church as part of the Music Mondays Concert Series.

Ms. Koh is active not only in the concert hall, but also as a lecturer, teacher, and recording artist. She is in residence in October at Cornell and Tulane Universities, during which she will perform, give master classes, and speak on topics from diversity to contemporary composition. Also this season, Cedille Records releases Ms. Koh’s recording of works by Kaija Saariaho, whose music she has long championed and with whom she has closely collaborated. Scheduled for release in November 2018, the album is Ms. Koh’s twelfth release on the Chicago-based label and includes the chamber version of the violin concerto Graal Théâtre with the Curtis Chamber Orchestra; Cloud Trio with violist Hsin-Yun Huang and cellist Wilhelmina Smith; Tocar with pianist Nicolas Hodges; Aure with cellist Anssi Karttunen, with whom she premiered the violin and cello version in 2015; and Light and Matter with both Mr. Hodges and Mr. Karttunen, with whom she performed the French premiere in 2017. The composer’s music also appears on Ms. Koh’s two Bach and Beyond albums—Nocturne on Part 1, Frises on Part 2. In 2016, Ms. Koh gave the world premiere of Sense for solo violin, which was commissioned for her Shared Madness project.

This season, Ms. Koh performs a broad range of concertos that reflects the breadth of her musical interests, from traditional repertoire such as Mozart’s Violin Concerto No. 1 (Los Angeles Philharmonic) and Vivaldi’s The Four Seasons (Rhode Island Philharmonic); to twentieth-century classics like Bernstein’s Serenade (Philadelphia Orchestra, as part of the All Bernstein: Celebrating 100 Years conducted by Yannick Nézet-Séguin, and Delaware Symphony), Ligeti’s Violin Concerto (Camerata Salzburg and Los Angeles Chamber Orchestra), and Szymanowski’s Second Violin Concerto (Jacksonville Symphony); to music of this millennium, such as Esa-Pekka Salonen’s Violin Concerto (Phoenix and Gothenburg Symphony Orchestras).

Ms. Koh brings the same sense of adventure and brilliant musicianship to her recordings as she does to her live performances. She has recorded twelve albums, including her fall 2018 Saariaho release, with Chicago-based Cedille Records. Her discography on Cedille Records also includes Tchaikovsky: Complete Works for Violin and Orchestra with the Odense Symphony Orchestra conducted by Alexander Vedernikov, Bach & Beyond parts 1 and 2; Two x Four in collaboration with her former teacher, violinist Jaime Laredo, and featuring double violin concerti by Bach, Philip Glass, and new commissions from Anna Clyne and David Ludwig; Signs, Games + Messages, a recording of violin and piano works by Janáček, Bartók, and Kurtág with Mr. Wosner; Rhapsodic Musings: 21st Century Works for Solo Violin; the Grammy-nominated String Poetic, featuring the world premiere of Jennifer Higdon’s eponymous work, performed with pianist Reiko Uchida; Schumann’s complete violin sonatas, also with Ms. Uchida; Portraits with the Grant Park Orchestra under conductor Carlos Kalmar with concerti by Szymanowski, Martinů, and Bartók; Violin Fantasies: fantasies for violin and piano by Schubert, Schumann, Schoenberg, and saxophonist Ornette Coleman, again with Ms. Uchida; and Ms. Koh’s first Cedille album, from 2002, Solo Chaconnes, an earlier reading of Bach’s Second Partita coupled with chaconnes by Richard Barth and Max Reger. Ms. Koh is also the featured soloist on a recording of Ms. Higdon’s The Singing Rooms with the Atlanta Symphony Orchestra led by Robert Spano for Telarc.

Ms. Koh is the Artistic Director of arco collaborative, an artist-driven nonprofit that fosters a better understanding of our world through a musical dialogue inspired by ideas and the communities around us. The organization supports artistic collaborations and commissions, transforming the creative process by engaging with specific ideas and perspectives, investing in the future by cultivating artist-citizens in partnership with educational organizations. A committed educator, she has won high praise for her performances in classrooms around the country under her innovative “Music Messenger” outreach program. Ms. Koh is a member of the Board of Directors of the National Foundation for the Advancement for the Arts, a scholarship program for high school students in the arts.

Born in Chicago of Korean parents, Ms. Koh began playing the violin by chance, choosing the instrument in a Suzuki-method program only because spaces for cello and piano had been filled. She made her debut with the Chicago Symphony Orchestra at age 11. She has been honored as Musical America’s 2016 Instrumentalist of the Year, top prize winner at Moscow’s International Tchaikovsky Competition, winner of the Concert Artists Guild Competition, and a recipient of an Avery Fisher Career Grant. She has a Bachelor of Arts degree in English literature from Oberlin College and studied at the Curtis Institute, where she worked extensively with Jaime Laredo and Felix Galimir. For further information, visit jenniferkoh.com.