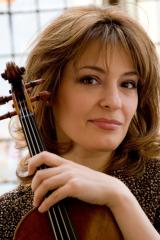 Irina Muresanu, violin, has won the hearts of audiences and critics alike with her exciting, elegant, and heartfelt performances of the classic, romantic, and modern repertoire. The Boston Globe has come to praise her as “not just a virtuoso, but an artist” and the Los Angeles Times has written that her “musical luster, melting lyricism and colorful conception made Irina Muresanu’s performance especially admirable” while Strad Magazine called her Carnegie/Weill Hall performance “a first-rate recital.” Ms. Muresanu’s performances have been frequently cited as among the Best of Classical Music Performances by the Boston Globe, and her recital in the Emerging Artist Celebrity Series was named one of the Top 10 musical events by Tab Magazine.

Her recordings include William Bolcom’s Violin and Piano Sonatas on the Centaur label with pianist Michael Lewin, funded by a Copland Recording Grant. In Europe, her recording of the Guillaume Lekeu and Alberic Magnard late Romantic Violin and Piano Sonatas with pianist Dana Ciocarlie for the AR RE-SE French label has sparked enthusiasm. Fanfare noted the recording with: “singing and soaring ... [a] sizzling performance.” Ms. Muresanu has also recorded the world premiere recording of Marion Bauer’s Sonata for Violin and Piano with pianist Virginia Eskin on Albany Records, and a CD featuring chamber works of Erich Korngold released by VPRO Radio Amsterdam. Adding to her other competition laurels, Ms. Muresanu was granted a Special Commendation award for her recording of Schoenberg’s Fantasy for Violin and Piano at the 3rd International Vienna Modern Masters Performers Recording Competition.

Irina Muresanu currently serves on the faculty of the Boston Conservatory and has taught in the Music Department of Harvard University and MIT. Her ensemble, the Boston Trio, is ensemble-in-residence at the New England Conservatory, the institution at which she received the prestigious Artist Diploma degree and a Doctorate in Musical Arts degree. A native of Bucharest, Romania, Ms. Muresanu resides in Boston, MA, with her husband, son and dog. She plays an 1856 Giuseppe Rocca violin and a Charles Peccat bow courtesy of Mr. Mark Ptashne.