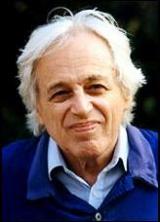 Ligeti was born in Târnava-Sânmărtin (in Hungarian, Dicsőszentmárton, renamed Târnăveni in 1945), in the Transylvania region of Romania to a Hungarian Jewish family. Ligeti recalls that his first exposure to languages other than Hungarian came one day while listening to a conversation among the Romanian-speaking town police. Before that he hadn't known that other languages existed. He moved to Cluj (Kolozsvár) with his family when he was 6 and he was not to return to the town of his birth until the 1990s.

Ligeti received his initial musical training in the conservatory at Cluj. In 1943, Northern Transylvania was taken over by Hungary following the Second Vienna Award. His education was interrupted when, as a Jew, he was sent to a forced labor brigade by the Horthy regime. His brother, at the age of sixteen, was deported to the Mauthausen concentration camp; his parents were both sent to Auschwitz. His mother was the only other survivor of the immediate family.

Following the war, Ligeti returned to his studies in Budapest, Hungary, graduating in 1949 from the Franz Liszt Academy of Music. He studied under Pál Kadosa, Ferenc Farkas, Zoltán Kodály and Sándor Veress. He went on to do ethnomusicological work on Romanian folk music, but after a year returned to his old school in Budapest, this time as a teacher of harmony, counterpoint and musical analysis. However, communications between Hungary and the West by then had become difficult due to the restrictions of the communist government, and Ligeti and other artists were effectively cut off from recent developments outside the Soviet bloc. In December 1956, two months after the Hungarian revolution was put down by the Soviet Army, he fled first to Vienna and eventually took Austrian citizenship.

In Cologne he met several key avant-garde figures and learned more contemporary musical styles and methods. These included the composers Karlheinz Stockhausen and Gottfried Michael Koenig, both then working on groundbreaking electronic music. Ligeti worked in the same Cologne studio, and was inspired by the sounds he heard there. However, he produced little electronic music of his own, instead concentrating on instrumental works which often contain electronic-sounding textures.

From this time, Ligeti's work became better known and respected. His best known work spans the period from Apparitions (1958–59) to Lontano (1967), although his later opera, Le Grand Macabre (1978) is also fairly well-known. In more recent years, his three books of Études for piano have become better known thanks to recordings made by Pierre-Laurent Aimard, Fredrik Ullén, and others.

Ligeti took a teaching post at the Hamburg Hochschule für Musik und Theater in 1973, retiring in 1989. In the early 1980s, he tried to find a new stylistic position (closer to "tonality"), leading to an absence from the musical scene for several years until he reappeared with the Trio for Violin, Horn and Piano (1982). His output was prolific through the 1980s and 1990s. Invited by Walter Fink, he was the first composer featured in the annual Komponistenporträt of the Rheingau Musik Festival in 1990.

However, health problems became severe after the turn of the millennium, and vocal pieces no longer appeared after the song cycle Síppal, dobbal, nádihegedüvel ("With Pipes, Drums, Fiddles", 2000). Ligeti's last original work to be completed is the eighteenth piano etude of 2001, "Canon." This title and the form of the etude recall the musical language of Ligeti's central European homeland.

Ligeti died in Vienna on June 12, 2006 at the age of 83. Although it was known that Ligeti had been ill for several years and had used a wheelchair the last three years of his life, his family declined to release the cause of his death. Ligeti's funeral was held at the Vienna Crematorium at the Zentralfriedhof, the Republic of Austria and the Republic of Hungary represented by their respective cultural affairs ministers. The ashes were finally buried at the Zentralfriedhof in a grave dedicated to him by the City of Vienna.

Aside from his musical interests, Ligeti was interested in literature, for example in Lewis Carroll, and the arts, in architecture, in science and mathematics, especially in the fractal geometry of Benoît Mandelbrot, and in Douglas Hofstadter.

Ligeti was the grand-nephew of the great violinist Leopold Auer. Ligeti's son, Lukas Ligeti, is a composer and percussionist based in New York City.

[Concert Review] Rock-solid But Not Maniacal