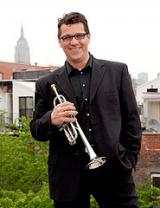 Trumpeter Eric Berlin has made the music of our time the focus of his career. As a soloist, Eric has commissioned, premiered and recorded new works for trumpet from some of today's most exciting composers, including Robert Bradshaw, Michael Ellison, Eric Ewazen, Evan Hause, Salvatore Macchia, Stephen Paulus, and James Stephenson. A new recording of American Trumpet Sonatas with pianist Nadine Shank will be released in the spring of 2011 with two other recording projects of new chamber music and new music for trumpet and band in progress. Mr. Berlin will premier and record a new concerto by George Tsontakis commissioned for him by the Albany Symphony Orchestra in March 2012.

Mr. Berlin has been Principal Trumpet of the Albany Symphony Orchestra since 1998 and can be heard with that ensemble on more than a dozen acclaimed recordings that include works by Morton Gould, John Harbison, Roy Harris and William Schuman to name a few. He holds the same position with the Boston Philharmonic Orchestra and is a member of the Boston Modern Orchestra Project, where he can be heard on over two dozen recordings by living American composers including Derek Bermel, Lukas Foss, Charles Fussell, Steven Mackey, Gunther Schuller, and Evan Ziporyn. Since 2006, has spent his summers performing as Associate Principal Trumpet of the Colorado Music Festival in Boulder, CO. In addition to his regular positions, he has performed with the Boston Symphony Orchestra and the New York Philharmonic, as well as the Baltimore Symphony Orchestra and the Boston Pops.

A native of Pennsylvania, Mr. Berlin attended the New England Conservatory of Music, where he was a student of Charles Schlueter, former Principal Trumpet of the Boston Symphony Orchestra and Robert Nagel of the New York Brass Quintet. He has also studied extensively with Vince Penzerella of the New York Philharmonic, Tom Rolfs of the Boston Symphony Orchestra, and Frank Kadarabek, former Principal Trumpet of the Philadelphia Orchestra.

While not performing and teaching, he can be found running, hiking and biking in Western Massachusetts where he lives with his wife Alison and their pack of three big dogs. Eric Berlin is a Yamaha Performing Artist.