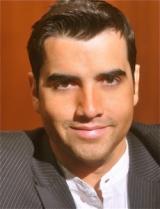 Originally from San Juan, Puerto Rico, Christian is a graduate of Syracuse University and received his Masters in Opera Performance from the New England Conservatory of Music.
Christian Figueroa accels in a wide range of vocal styles and characterizations. His career has taken him from the madcap world of operetta, to the dramatic depths of opera, from the realism of the Broadway stage, to the musically demanding oratorio setting. Christian has delighted audiences with his unique combination of vocal and dramatic skills in performances ranging from the stage to the recital hall.

Christian recently performed and recorded the role of Antigonus in the opera A Winter's Tale with the Boston Modern Orchestra Project. This recording is slated for a 2012 release on the BMOP Sound Record Label. Some of Mr. Figueroa's opera roles include Ezekiel Cheever in The Crucible, Toby Higgins in The Rise and Fall of the City of Mahagonny, Alphonse in La Vie Parisienne, Vitellozo in Lucrezia Borgia and Patacha in L’etoile all with Opera Boston. Some of Christian's Musical Theater roles include Giuseppe Nacarelli in Speakeasy Stage's production of The Light In The Piazza, Che in Evita, Ike Skidmore in Oklahoma, & Lt. Peter Wright in The Secret Garden.

Christian is currently the tenor soloist in the Handel and Haydn Educational Outreach Quartet where they visit over 10,000 people each season all across NE. In February he sang the tenor solos in the "Gloria" from Mozart's Coronation Mass at the Boston Symphony Hall with the Handel and Haydn Society. In August he was honored to sing the National Anthem at Fenway Park representing the Peace Corps for its 50th Anniversary Celebration.