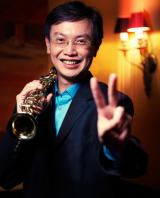 Chien-Kwan Lin (b. 1972, Singapore) has appeared as soloist and guest artist with the United States Navy Band, the Eastman Wind Ensemble, the Boston Modern Orchestra Project, the Tanglewood Festival Orchestra, the New World Symphony, the Portland (ME) Symphony, as well as the philharmonic and chamber orchestras of Boston, Rochester, Sichuan and Thailand.

Mr. Lin’s performances have garnered excellent reviews by critics in New York and Boston. His critically-acclaimed Carnegie Hall recital prompted New York Concert Review to portray him as a performer “who has the passion and restraint and beautiful sense of line to take melody where it wants to go, fully and generously,” while the Boston Globe has lauded him for “displaying chops,” and has described his playing as “polished,” “charismatic,” and “appealing.”

Mr. Lin’s recording of Lei Liang’s Memories of Xiaoxiang for Alto Saxophone & Tape (Mode Records) was selected among “Amazon.com: Best 20th/21st Century Classical of 2009,” and his recording of David Liptak’s Serenade for Alto Saxophone & String Orchestra, which John Pitcher of the Rochester Democrat and Chronicle called “brilliantly recorded,” is available on Bridge Records.

Since winning top prizes in Singapore’s National Music Competition four consecutive times (violin category), Mr. Lin has enjoyed a multi-faceted career. He won a Best Conductor Award at Singapore’s National Band Leaders Festival, and also worked for several years as a jazz violinist. In addition, he has appeared as orchestral violinist with the New Hampshire Symphony, the Indian Hill Symphony, and the Hannover (NH) Chamber Orchestra.

Mr. Lin is currently Associate Professor of Saxophone at the Eastman School of Music, where members of his studio have been frequent prizewinners at some of the nation’s most prestigious competitions. He is the founder and director of the Eastman Saxophone Project (ESP), as well as the recipient of the 2012-2013 Eisenhart Award for Excellence in Teaching. Mr. Lin is an artist and clinician for Selmer and Vandoren companies, and performs exclusively on these products. He holds degrees from the New England Conservatory (BM, MM) and Eastman (Performer’s Certificate, DMA). His teachers have included Ken Radnofsky and Ramon Ricker.

Boston Modern Orchestra Project’s 15th annual “Boston ConNECtion” concert at Jordan Hall on March 28th was, as you can adduce by reading BMInt’s interview with composer Donald Crockett here, is a bit of a stretch programmatically, as only two of the four composers whose works were presented (the two youngest, as it happened) have or had anything like a significant association with New England Conservatory, and only one of them currently resides in the area.

During China’s Cultural Revolution, one of the world’s oldest civilizations tore itself apart. The estimated 70 million deaths that resulted have touched the lives of just about everyone in the country and many around the world.

One story from China’s remote Xiaoxiang region tells of a widow who avenges the death of her husband by tormenting his killer, a local communist official. Devoid of any legal means of seeking justice, she sat in the forest behind the official’s house every night for months and wailed like a ghost. Both went insane.

Basically, as one shamelessly comes to expect with a band as expert as this one, the performance was without blemish.