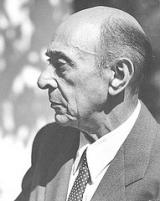 Arnold Schoenberg (1874–1951) was an Austrian and later American composer, associated with the expressionist movement in German poetry and art, and leader of the Second Viennese School. He used the spelling Schönberg until after his move to the United States in 1934, whereupon he altered it to Schoenberg "in deference to American practice," though one writer claims he made the change a year earlier.

Schoenberg's approach, both in terms of harmony and development, is among the major landmarks of 20th century musical thought; at least three generations of composers in the European and American traditions have consciously extended his thinking or, in some cases, passionately reacted against it. During the rise of the Nazi party in Austria, his music was labeled, alongside jazz, as degenerate art.

Schoenberg was widely known early in his career for his success in simultaneously extending the traditionally opposed German Romantic styles of both Brahms and Wagner. Later, his name would come to personify pioneering innovations in atonality that would become the most polemical feature of 20th-century art music. In the 1920s, Schoenberg developed the twelve-tone technique, a widely influential compositional method of manipulating an ordered series of all twelve notes in the chromatic scale. He also coined the term developing variation, and was the first modern composer to embrace ways of developing motifs without resorting to the dominance of a centralized melodic idea.

Schoenberg was also a painter, an important music theorist, and an influential teacher of composition; his students included Alban Berg, Anton Webern, Hanns Eisler, and later John Cage, Lou Harrison, Earl Kim, and many other prominent musicians. Many of Schoenberg's practices, including the formalization of compositional method, and his habit of openly inviting audiences to think analytically, are echoed in avant-garde musical thought throughout the 20th century. His often polemical views of music history and aesthetics were crucial to many of the 20th century's significant musicologists and critics, including Theodor Adorno, Charles Rosen, and Carl Dahlhaus.

Schoenberg's archival legacy is collected at the Arnold Schönberg Center in Vienna.