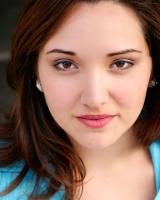 Aliana de la Guardia is a classical singer, actor, and producer hailed by The Boston Globe as “vocally fearless” and “fizzing with theatrical commitment.” The Cuban-American performer began training in theater and film at a young age in her native New Jersey and completed studies in voice and opera at The Boston Conservatory (BM & MM) and additional studies with New Repertory Theater (MA) and SITI Company (NYC).

An avid performer of new music, she has performed the works of many of the leading composers of our time such as Birtwistle, Gorecki, Harvey, Kurtág, and Sciarrino, among others. She has performed in over twenty new operas, and as a co-founding artist and general manager of Guerilla Opera, she has co-produced and premiered fourteen new operas with roles written specifically for her. Dirty Paloma is an additional solo project through which she has presented concerts throughout New England, and various collaborations with the performers Jonathan Nussman, Gabriela Diaz, Tae Kim, Philipp Stäudlin and Mike Williams.

Operagasm writes: “De la Guardia’s work in new opera is proof of the genre’s viable potential as entertainment… her contemporary music projects are able to connect young audiences with music about the cultural fascinations of our times.” She is also committed to developing new chamber vocal repertoire, frequently collaborating with living composers.

Her experience extends to standard classical repertoire as well, including performances with Boston Lyric Opera, Granite State Opera, New England Philharmonic, Lorelei Ensemble, and Cappella Clausura, among others. She can also be seen on television guest starring in the episode entitled “Missing” in the second season of ABC’s Body of Proof.

Additional engagements include guest speaker at the National Opera Association Convention in Memphis, TN (2012), and guest panelist at Boston Lyric Opera’s “Night at the Opera” series (2012). Artistic residencies include the Lawrence Conservatory (2015), Vermont College of Fine Arts (2015), Harvard University (2014), University of Memphis (2011), and performance faculty at Hubbard Hall Opera Theater (2011, 2012, 2014). She has been twice nominated as Best Actress in an Opera by ArtsImpulse. She is also currently a full-time private voice teacher in Massachusetts.