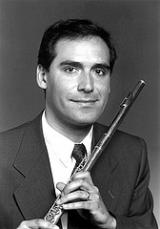 Described as a virtuoso flutist by The Boston Globe, Alberto Almarza brings a unique and passionate approach to music. His versatility and musicianship have led him to perform and record some of the most adventurous and challenging pieces from the music of today as well as works from the standard repertoire and Baroque literature on period instruments.

A native of Chile, Mr. Almarza previously held the position of Principal Flute of the Philharmonic Orchestra of Santiago. He later came to the United States to study with Jeanne Baxtresser in New York and with Julius Baker at Carnegie Mellon University in Pittsburgh, where he obtained his Master’s degree. He currently serves on the faculty at Carnegie Mellon as Artist Lecturer in Flute.

His skills as a pedagogue, lecturer and recitalist have led to invitations from international festivals in the U.S., Mexico, Germany, Chile, Argentina and Peru. He is a resident artist and member of the faculty at The Jeanne Baxtresser International Master Class at the Juilliard School in New York and has been recently appointed to the National Flute Association Advisory Board for New Music.

Mr. Almarza has appeared as a soloist with the Boston Modern Orchestra Project, Memphis Symphony, BachFest Chamber Orchestra, and the Symphonic Orchestra of Chile, and has collaborated with such artists as Julius Baker,
Andrés Cárdenes, Lionel Party, and the Cuarteto Latinoamericano, among others. As a leading proponent of new music for the flute, Mr. Almarza has been instrumental in expanding the repertoire with numerous commissions and premieres of works by composers from around the world. Pieces written for him include three flute concertos and dozens of solo and chamber works.

He can be heard on radio broadcasts of International Music from Carnegie Mellon throughout North and South America, on compact discs from New Albion, Elán, Albany Records, and Centaur Recordings, as well as on a Naxos recording of the Flute Concerto by Reza Vali with the Boston Modern Orchestra Project.

Reza Vali, who was born in Iran, will probably be a new name to most readers. Vali is now based in the USA and has been the recipient of several prestigious awards and commissions.