Dominick Argento: Jonah and the Whale 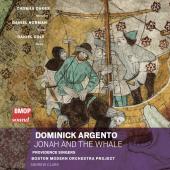 Dominick Argento’s Jonah and the Whale, completed in 1973, is an idiosyncratic, colorful, stylistically varied musical version of the well-known Biblical tale. The work is scored for narrator, tenor, bass and mixed chorus, accompanied by the unusual forces of three trombones, three percussionists, piano, harp and organ—a “trio of trios,” as the composer points out in his informative notes.

Dominick Argento delivers a vivid account of this Bible story. Completed in 1973, it is an early contribution to a genre—the large-scale choral work—in which Argento (b. 1927) has increasingly worked.

The Boston Modern Orchestra Project’s newest recording vibrantly illustrates Dominick Argento’s ability to merge myriad artistic sources. Jonah and the Whale was inspired by an Albertus Pictor painting on the ceiling of a church in Härkeberga, Sweden. Scored for chorus, instrumental nonet, narrator and soloists, the work exemplifies the American composer’s colorful and discerning aesthetic, as well as his heightened gifts in the vocal realm.

Given the short shrift faced by choral music in the twentieth and twenty-first centuries, it’s surprising that Dominick Argento has attained the status he has. Argento’s creative output includes a vast array of operas, choral works and song cycles (one of which, From the Diary of Virginia Woolf, earned him the Pulitzer Prize in music in 2004), yet a surprisingly small output of orchestral works: a relatively small number of symphonies and concerti, and practically no chamber works.